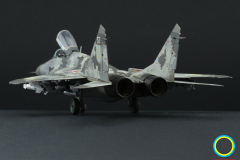 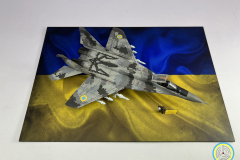 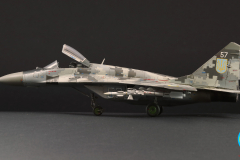 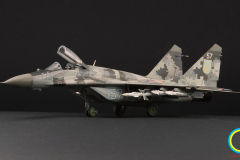 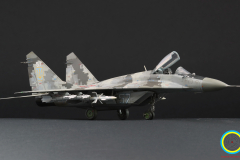 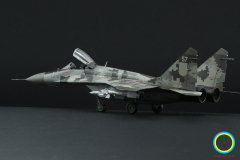 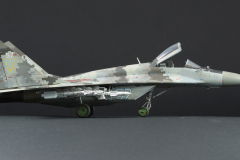 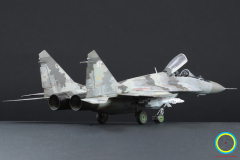 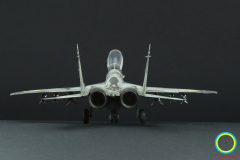 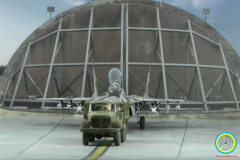 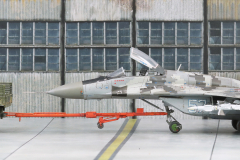 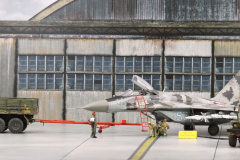 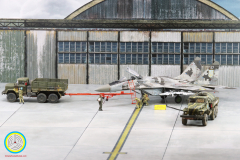 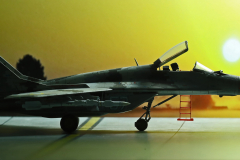 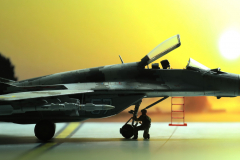 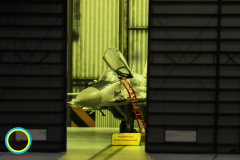 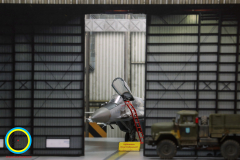 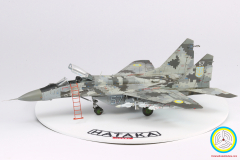 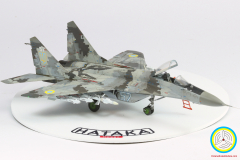 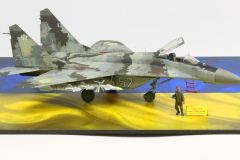 On 24th February 2022 Russia invaded Ukraine and a story emerged of a single ace Ukrainian fighter pilot patrolling the skies over Kyiv with the 40th Tactical Aviation Brigade (Military Unit Number A1789) who shot down 6 Russian aircraft on the opening day of the war. He became known as “The Ghost of Kyiv”. The Russian aviation losses over Kyiv on the first day were 2x Su-25, 1x Su-27, 2x Su-35 and 1x MiG-29; although these are confirmed it is impossible to say that were all downed by a single pilot and in my own opinion the story is likely just good propaganda “Watch your 6 or the Ghost will get ya!” aimed at demoralising Russian pilots and giving the Ukrainians a hero to cheer for.

It is known that Ukraine flies the modernised MiG-29MU1 (based on the MiG-29 9.13 Fulcrum C) and these are painted in Ukraine’s unique and spectacular grey digital camouflage pattern, but as no confirmed image of an aircraft actually flown by the Ghost has come to light the Bort number (large serial on the side of the intake) is open to my whim 🙂

I went on a Google safari to find the “nicest” MiG-29 9.13 1:72 and narrowed it down to the new tool Zvezda (2015 tooling, not the older one) and Trumpeter (also 2015); both of these have detailed engraved surface detail are have a dedicated 9.13 option (a slightly humped and wider spine for extra fuel). Both of these are built with the main intakes open (flight mode). In the end I opted for the Russian kit over the Chinese as the auxiliary intakes are closed on that (as they likely would be with the main intakes open), it comes with 6 air to air pylons (Trumpeter only has 4) and the forward fuselage shape is apparently a little more accurate – also, I’m not without a sense of irony and using a Russian produced kit to base a Ukrainian ace pilot build on ticked this box 😉 The Zvezda kit also comes with a huge array of air-ground ordnance that won’t be used in this build and a set of ground maintenance blanking plugs for the intakes and exhausts plus a set of wheel chocks.

This was built using the kit provided 2 R-27T (NATO: AA-10 Alamo) on the inner pylons and  4 R-73 (NATO: AA-11 Archer) on the outer 2 pylons on each wing which seems a fairly typical load out. The kit includes nicely detailed representations of these and also stencils for them on the decal sheet.

Of the kit build there isn’t a lot to say. With a little care in dry-fitting the pieces fitted together very well indeed. I have used no filler whatsoever. The canopy can be posed open or closed and there is enough decal and seat detail to justify the open position if desired. The other options are for ground covers on the intakes and exhausts (plain red), but bizarrely the kit doesn’t include the auxiliary intake cover plates which would be fitted at the same time – not a difficult scratch build though; fitting these will however cover up a decently rendered pair of exhausts including burner rings and a view of the full length intake and compressor faces.

There are quite a few decal sheets and masking sets out there coving these grey machines and most feature a well known aircraft (White Bort 57) which amongst the camouflage has section painted like the Ukrainian flag (a trident), each MiG was apparently painted individually so like a zebra’s stripes each is likely unique! As there is no definitive known ID for the Ghost’s aircraft, I was free to go with whichever Bort number I fancied… White 57 it was then 😉 During some pre-build research I did however find out that White 57’s Bort number was originally white with a yellow border but was later repainted white with a blue border in about 2016 I believe along with the rest of the unit.

Another find on colours is that the MiG-29 cockpit is a bluey-grey not the vivid blue-green of earlier aircraft.

My paint brand, (Hataka) already do a dedicated set of 6 paints for the Ukrainian Grey Digital scheme (available in normal acrylic [HTK-AS109] and lacquer types [HTK-CS109]) and includes the 4 shades of grey for fuselage and a grey for the radome and dielectric panels. The masks for the camouflage came from DN Models, this is first time I have used these – I applied the darker shade first and worked lighter (as that was how it seemed the masks were designed – this seemed to work fine 🙂

The cockpit was painted with HTK-046 Medium Grey (FS35237) which has the slight Blue-Grey tone I was looking for but most of the visible surfaces are overlaid with nicely detailed decals for panel and instrument detail. For the digital scheme I followed Hataka’s recommendations for the 4 colours (dark to light) HTK-030 European I Grey (FS36081), HTK-249 Dusty Grey (RAL 7037), HTK-189 Silver Grey (RAL 7001) and HTK-048 Light Gull Grey (FS36440); the radome and dielectric panels are HTK-335 Mouse Grey (RAL 7005). Looking at reference photos these look pretty good colour calls. For the pattern itself I sourced a set of vinyl masks from DN-Models (dnmodels.com); this was first time using their product and I am VERY impressed, they fitted like a glove! I started with the overall darkest shade, then masked this etc. then moved to the next lightest shade and so on…. About 8 hours in all to mask and spray and about 10 minutes to remove it all…. My only comment was that I did have a little gluey residue left behind, but this lifted with the application of some white spirit (as I use lacquer paints the white spirit had no effect on the paint after a couple of hours curing).

For the decals I used the kit technical stencils, these are very handily grouped into small areas incorporating 3 or 4 stencils at a time where possible; the film is very thin and responded well to my usual MicroSol/Set combo over a gloss lacquer coat. They are printed in red (warnings) and blue (instructions) but to my eye the printing itself appears a little chunky, Zvezda haven’t gone to the trouble of trying to make the printing legible in 1:72 (some manufacturers do try….) and the lettering is represented by a series of bumps and line which in this scale works well enough. The earliest aircraft in this livery had the bort number repeated in very small numbers on the tail RWR covers but these seem to have become larger and moved down onto the main camouflaged section of the tail outer surfaces on later aircraft – I’ve gone with the later look as this is a 2022 specification aircraft. These, along with the MiG pink canopy lining (Begemont decals) and kill markings came from the decal stash.

The figures are both from the kit (there are seated and standing ones provided in the box) match the standard set by Zvezda with their 1:72 wargaming range, the detail is excellent and can be brought to life with simple washes and dry brush highlights.

The bases and backgrounds all come from Coastal Kits of Blackpool (www.coastalkits.com) including the specially commissioned Ukrainian flag one.

The 2 trucks are from ICM of Ukraine and are beautifully detailed kits in their own right. These are the ZiL-131 truck (kit 72811) and theATZ-5-4320 fuel bowser (kit 72613); both are painted in Hataka’s Modern Ukrainian AVF paint set (HTK-AS112/HTK CS-112), the truck was hand masked in a representation of the modern pixel camo currently in use.

The elephant in the room

Due to the political nature of the subject (I can’t imagine Zvezda ever releasing their own “Ghost” boxing) the one point to mention is the origin of the kit. Zvezda is of course Russian, and although the company isn’t sanctioned, modellers will have to make their own minds up if the origin poses a problem. I justified my purchase as this was ordered from my local model shop via a UK importer and was drawn from pre-existing UK based stock and enabled them to recoup already spent investment, no additional sales to Russia were involved.

For those that don’t wish to use Russian plastic the Trumpeter kit (Chinese) is another very worthy contender. Another source is to look for the 2017 Revell or Academy boxings or Platz from 2018, these all used this Zvezda tooling. The Academy boxing appears to use the same Zvedza decals but Revell have gone for the “Falcons” aerobatic team livery from 2008 (with 3 alternate bort numbers) so the stencils will likely be missing, whilst the Platz offerings are a 9.13 of the Russian “Top Gun” and another boxing with different Russian and Ukrainian markings.

Given the increasing sanctions against Russian banking and their impact on imports I can’t imagine that these kits are going to get any easier to find in the short/medium term or how viable the tie-ins between Revell and Zvezda is going to remain.