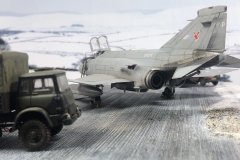 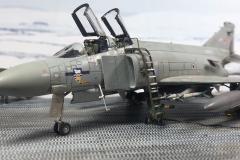 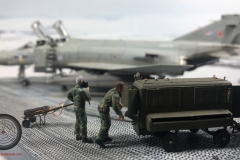 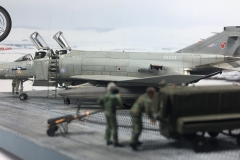 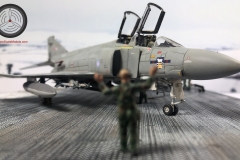 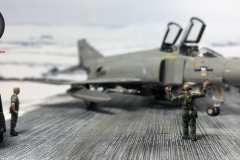 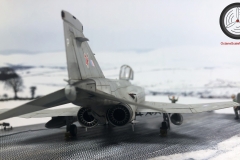 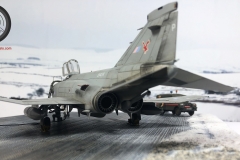 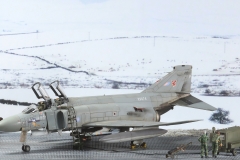 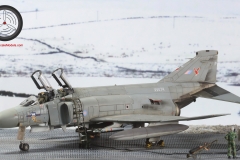 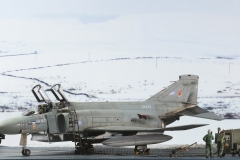 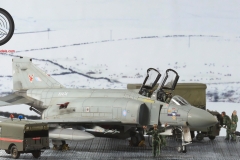 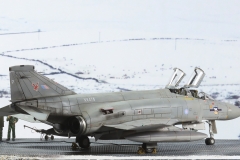 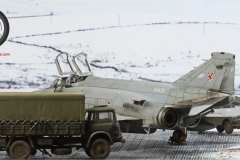 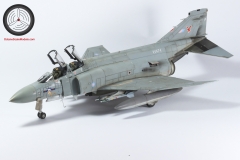 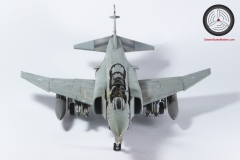 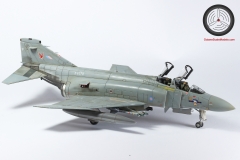 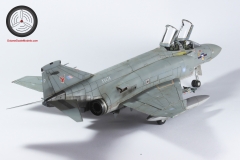 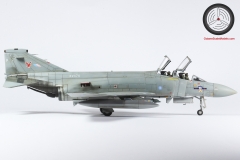 In the aftermath of the Falklands Conflict of 1982 an urgent need was identified to base a deterrent force on the Islands to prevent either a 2nd invasion or to discourage thoughts of one from forming. To this end the F-4 Phantom FGR2s of 29 Sqn, which had been forward positioned to Ascension Island during the conflict to provide across the Atlantic, were moved down to the newly patched up “RAF Stanley” (Formerly Port Stanley Airport).

In October 1983, 29 Sqn were replaced by 23 Sqn (also equipped with Phantom FGR2s), moving to the newly built RAF Mount Pleasant in 1986 some 33 miles to the east; they remained on the islands for 5 years in total. In October/November 1988 (by then reduced to 4 FGR2s) they were replaced by the newly reformed 1435 Flt (taking over the last remaining 4 23 Sqn FGR2s) when the squadron re-equipped with the Tornado F3.

This is Airfix 2nd issue of their new 1:72 British Phantom tooling, introduced around Christmas 2017 as the Royal Navy FG1, this RAF FGR2 followed in January 2019.

Differences to the original release include an updated nose undercarriage, new horizontal (-ish on a Phantom) stabilisers, SUU-23A gun pod, and an FGR2 recon pod and targeting module. On the downside, the parts for the separate detailed Westinghouse AN/AWG-10 radar included in the original FG.1 issue are no longer included in the latest FGR.2 boxing.

Having several of the original FG.1 in my stash I can’t help but think a LITTLE flash has started creeping in on some parts (hardly surprising given the almost constant production through 2018), Airfix have I think missed a beat though, the SUU-23 gun port is lacking in most surface detail apart from a nicely detailed rotary barrel, the Sparrow missiles are lacking in most detail and the Sidewinders are the AIM-9B>H shape, and although this would be suitable for the camouflaged decal option included, the AIM-9L (with its distinctive double delta front planes) would be more fitting for the other 2! Although not referenced in the instructions the folded wing tips are still included on this boxing’s sprues along with the FG.1 round tip tail as opposed to the later FGR.2 tail with the additional RWR receiver.

The kit however remains a good build. One of the criticisms of the original release was the lack of grills around the top and bottom of the intake and just above the exhausts, this has been addressed in this issue with decals that replicate the grills; HOWEVER Airfix have transposed them, indicating #25 decals should be placed on top of the intakes and #27 underneath – this should be reversed! – the drawings are correct, they just got the number references the wrong way around.

A fun build and one that can give SO MANY livery options given the long service and many squadrons the FGR2 served with.

This was painted in Hataka‘s Orange Line lacquer Camouflage (Barley) Grey, Medium Sea Grey and Light Aircraft Grey. To give the requisite different shade to the radome I mixed a few drops of Camouflage Beige (Hemp) with the Camouflage (Barley) Grey – this was faded into a heavier hint of Hemp at the tip of the radome to portray the wear and tear normally seen there. I have a photo of XV474 with a section of clean (probably replaced) panel work on the port-side engine covers whilst on station at RAF Stanley and I have tried to show this as well along with a worn cover on the in-flight refuelling probe. The round Hataka base came as usual from Coastal Kits Display Bases. The PSP matting is an Italeri product (it just needs painting), the Land Rover and Bedford are Airfix/JB Models, the Houchin 25kVA generator and boarding ladders are Flightpath. The Fire trolley, ane wheel chocks date back to PP Aeroparts, a long defunct company that made some excellent RAF diorama accessories)