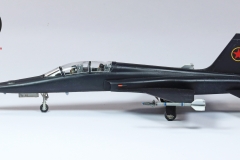 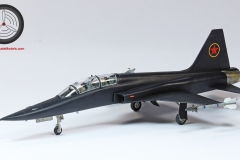 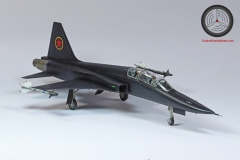 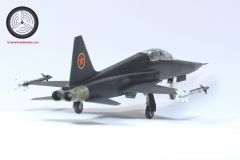 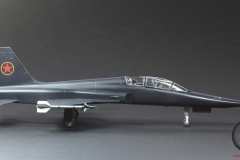 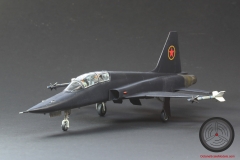 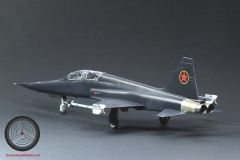 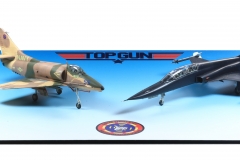 The movie Top Gun starts and ends with dogfights between US Navy F-14s and mythical MiG-28 adversaries. For this, the US Navy painted up 4 F-5s (3 single seat F-5Es and 1 two seat F-5F [160965]) as the “enemy” aircraft. The colour scheme was simple to say the least, just black overall with a red star in a yellow circle on the tail – that’s it… The aircraft normally carried 2 AIM-9L Sidewinder drill rounds on the wing tips (2 blue bands on the body signifying a dummy warhead and dummy rocket motor).

There were many problems with the paint finish and the producers must have been incredibly picky with which shots to use, as the black paint had a habit of peeling off in flight exposing the beige-yellow primer underneath! There are many images online now from the filming in 1985 that show sometimes massive sections of missing paint.

After the movie filming had finished, some of the aggressor F-5s remained in a visually similar scheme to the movie aircraft for use in the actual Fighter Weapons School (although with the pilot’s name written in Cyrillic under the canopy and a slightly smaller red star).

The paint for this model proved less problematic though as I used Hataka‘s Orange Line Lacquer paint, Night Black (FS37038, ANA 604), HTK-C041. This is actually an incredibly dark blue which gives a little contrast to the model rather than plain black!

The Italeri kit dates back to 1982 (although this was built from the most recent 2018 boxing) and shows its age in places. The panel lines are fine but raised and the wheel well detail is there but basic. The front cockpit is nicely detailed but for some bizarre reason the rear cockpit is rather plain. Basic (but fairly correctly shaped) ejector seats are provided but no crew, 2 Airfix pilots got a service transfer to populate this as the kit does not contain crew figures.