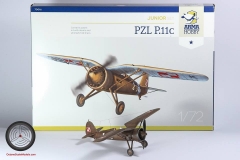 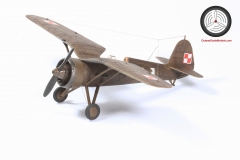 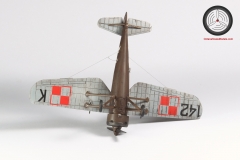 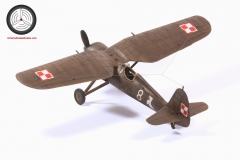 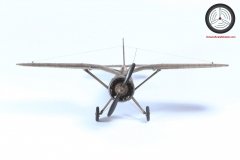 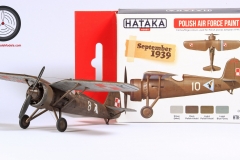 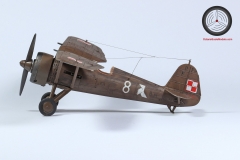 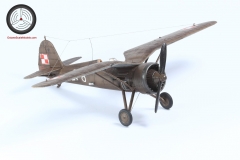 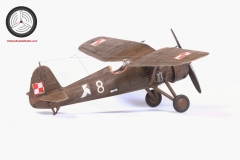 The PZL P.11c (Państwowe Zakłady Lotnicze – State Aviation Works) started development in the late 1920s with the 1st of Zygmunt Puławski’s prototypes the PZL P.1. This featured what was be become known as the “Polish” or “Pulawski” wing which featured a high gull wing design mounted infront of the cockpit giving the pilot exceptional visibility. This first prototype featured an inline engine, but the next version (the PZL.6 – no idea about 2-5…) replaced this with a Bristol Jupiter VI. In it’s day the design and performance (most air forces still had biplanes) was considered remarkable; in face it won the American National Air Races in August–September 1931.

The design was improved yet again to the PZL.7 with an improved Jupiter VII engine; the second prototype of this featured the enclosing Townend ring around the engine rather than exposed cylinder tips. This version (with a slightly increased wingspan) entered production as the P.7a in 1931.

The next production variant was the P.11a which was based on P.7a but featured a new licence built Bristol Mercury engine which upped the power to 575hp.

The P.11c tweaked the design further by dropping the engine line so the top of the fairing was inline with the top of the fuselage (improving the pilot’s view considerably) along with a tweak to the centre part of the wing. The 11c also had the Mercury V S2 or VI S2 engine rated at 600 or 630hp. By the end of 1937, 175 p11c had entered service with the Polish Air force.

The P.11 proved an export success with Bulgaria building the P.11a and P.11c under licence.

This aircraft “White 8” is known to have been damaged on the 1st day of hostility and abandoned.

Only one known P.11c remans in existence and is on show in the Polish Aviation Museum in Kraków (it is actually the subject of the 2nd decal option in the kit) – it was originally captured by the Germans and exhibited throughout the war in Berlin before being rescued and returned home.

Wladyslaw Wojciech Chciuk was born in 1915 in Oświęcim which at that time was part of the province of Galicia, part of the Austro-Hungarian Empire. After Polish independence after WWI he graduated High School where he was an Eagle Scout and member of the Gliding Club.

He graduated the Polish Air Force Academy in Deblin in 1939 and was assigned to the IIIrd / 2nd Squadron in Kraków as a Cadet Officer. He was promoted to 2nd lt. on the outbreak of hostilities and was assigned to 121Sqn. Along with the remaining personnel of teg sqn he was ordered to evacuate to Czechoslovakia on September 17 ahead of the advancing German and Russian forces.

Placed in what was little more than an internment camp, he and fellow pilot fled and made their way through Yugoslavia and Greece to Athens they got transport on the SS.Pulaski to Marseilles.

On reaching France he became part of the “Montpellier” group flying Morainnes where he continued his war against the Germans in 1940 as part of the Groupe de Chasse III / 1 in Toul Croix de Metz. In this time he claimed 1 victory but was shot down twice (each time returning to his unit).
After the fall of France, he and his mechanics headed to Gibraltar where they were evacuated to N.Africa and the UK. He became one of the first batch of pilots assigned to 308 “Krakow” Sqn as a Pilot Office (P0548) (an all Polish unit formed under an agreement with the Polish government in exile). First flying Hurricanes and then moving to Spitfires the squadron was eventually based at RAF Baginton where as part “Operation Circus”it was assigned to raid targets in occupied Europe. Whilst flying Spitfire mk.IIb P8327 (quite an usual version, being a cannon armed Mk,II) on 24 July 1941 on a raid over the Hazebrouck Marselling yards his Sqn was engaged in a dogfight with a Sqn of bf109s. He shot own one but was bracketed by this wingman and was shot down himself. Suffering burns he bailed out and was captured. The pilot he shot down also survived and visited Wladyslaw whilst he was recuperating in hospital.

During his time as a POW he was incarcerated in Oflag XC Lübeck, Oflga VI B Warburg and Stalag Luft III in Żagan where he was participated in the digging of the “Great Escape” tunnel – although he wasn’t one of escapees.

After the war with little chance of return to now Soviet occupied Polandhe remained in the UK where he met and married a former Warsaw Uprising survivor (who as a teenager has spent time smuggling weapons and ammunition to the Polish underground). Joined by his brothers he left for the USA in 1951 where he lived in Malwaukee living asa turner and painter. In 1965 he moved with his family to San Fransisco and retired in 1983 – he remained active until late in life. He passed away 7th October 2006 at the age of 91.