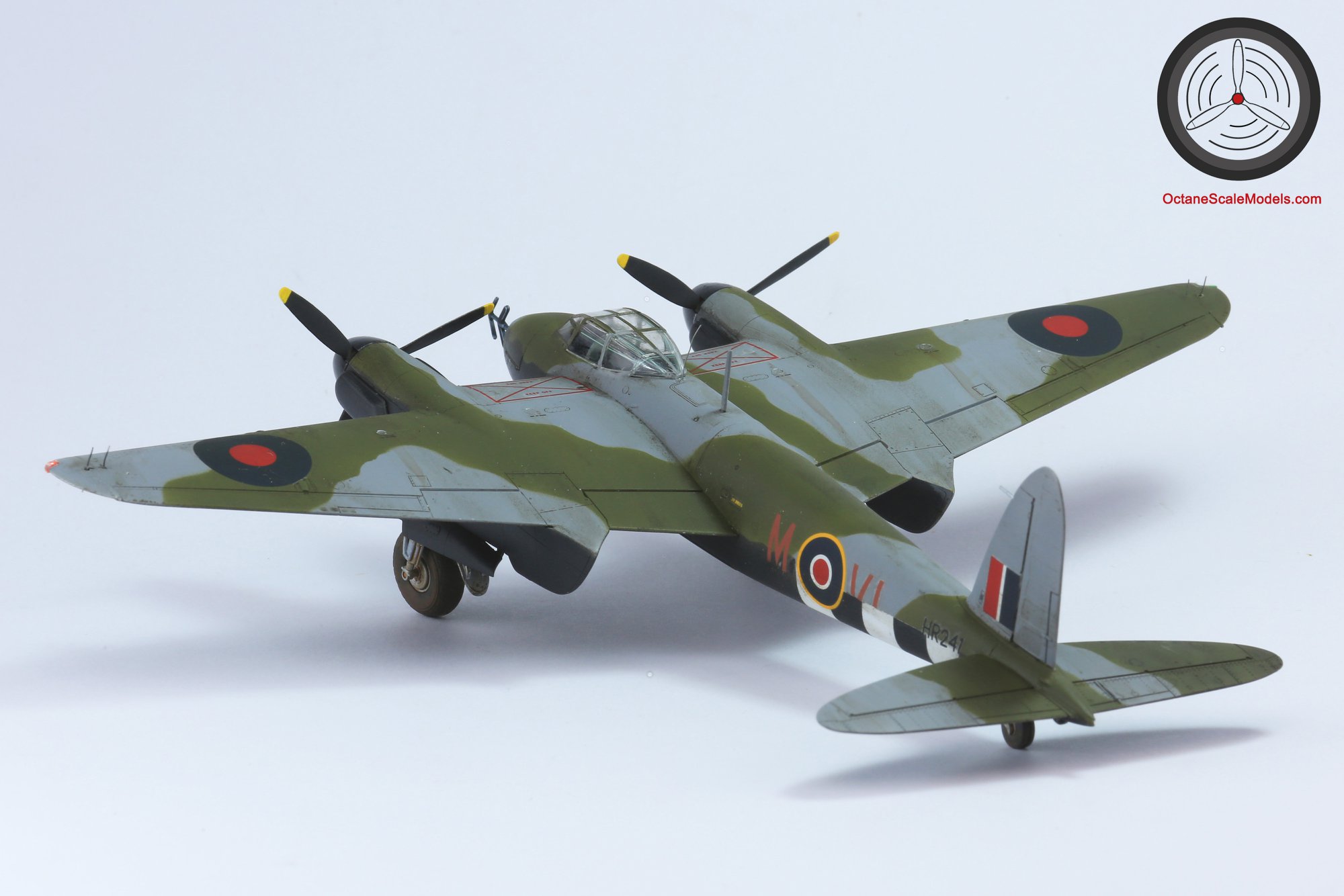 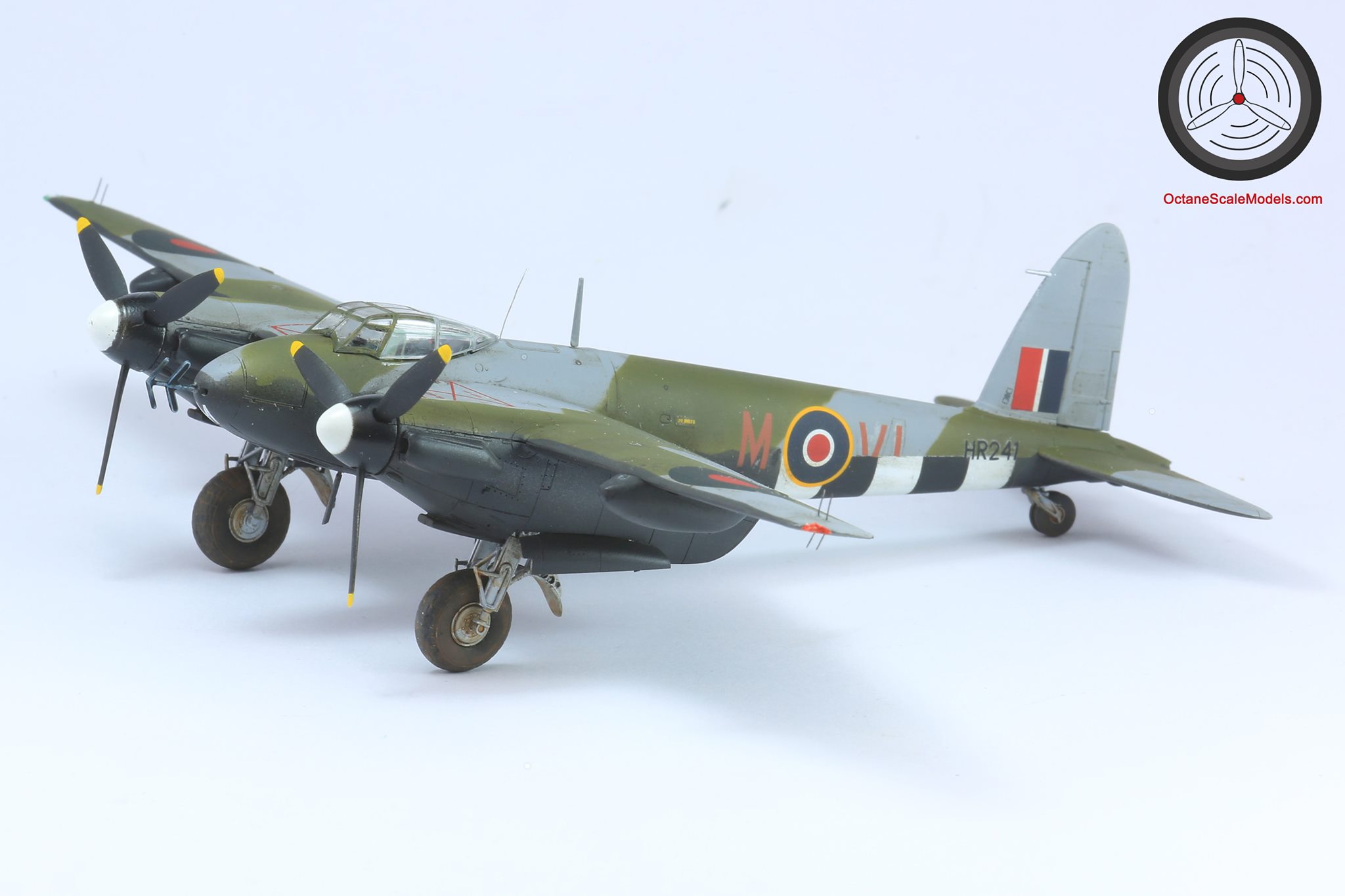 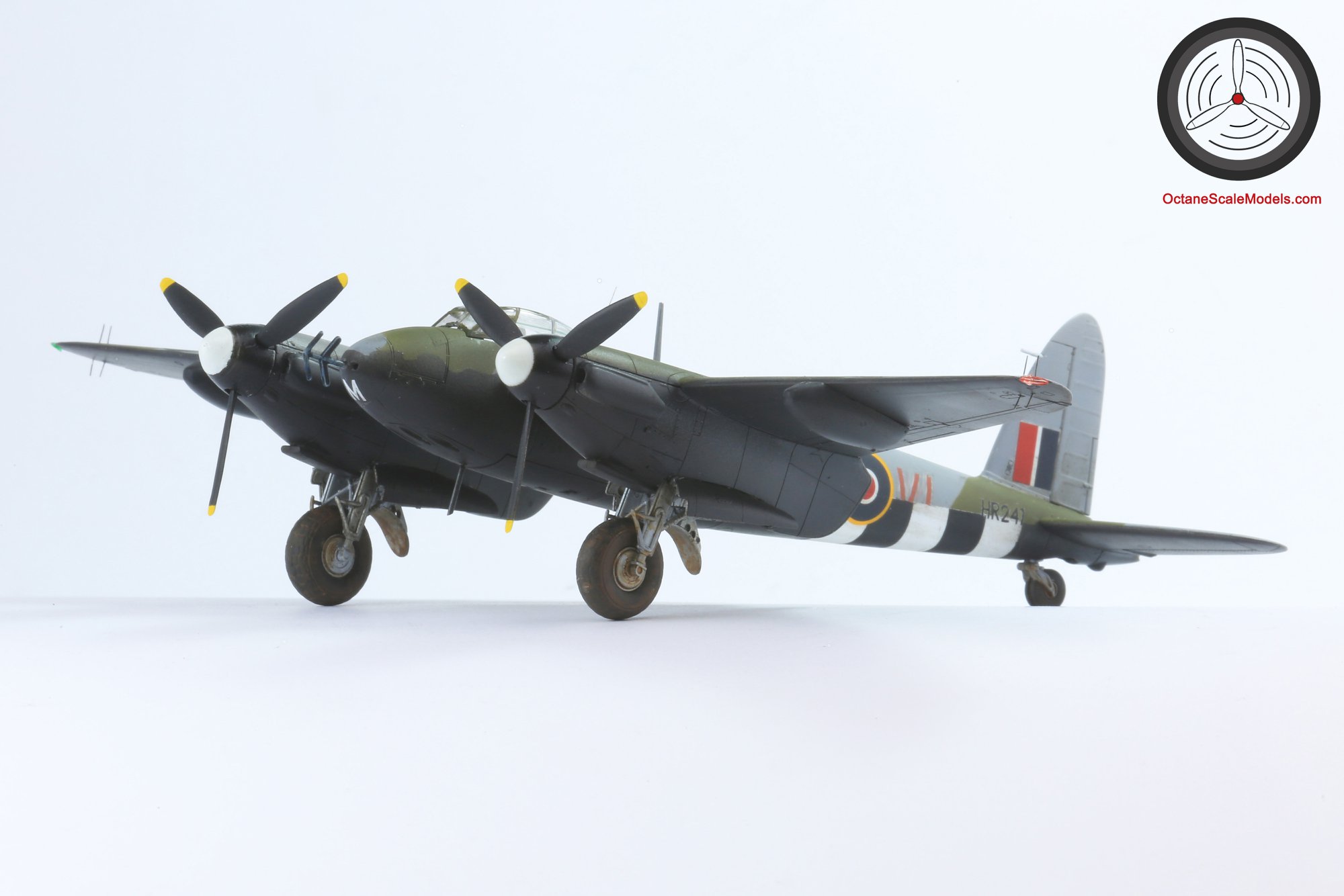 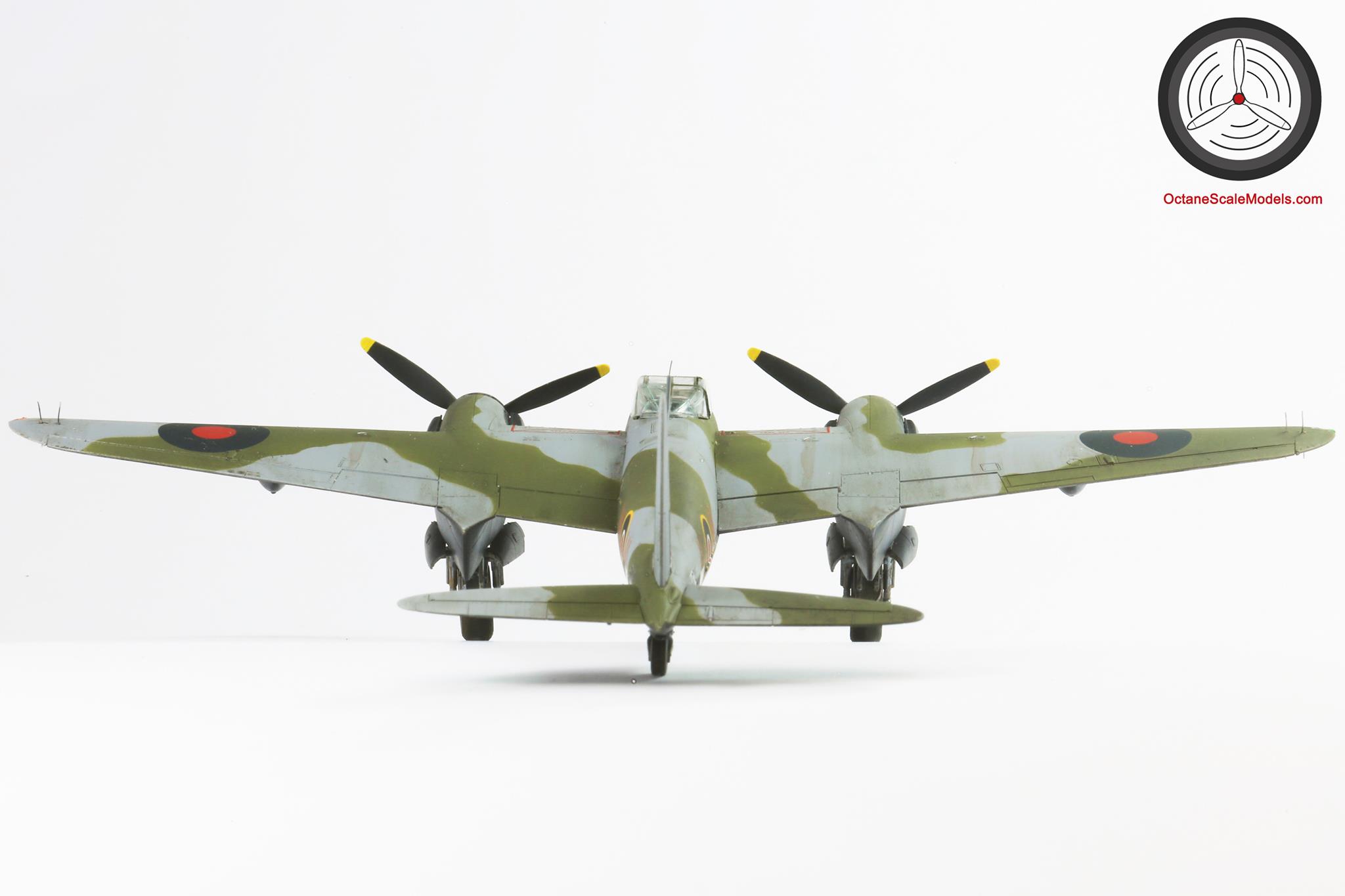 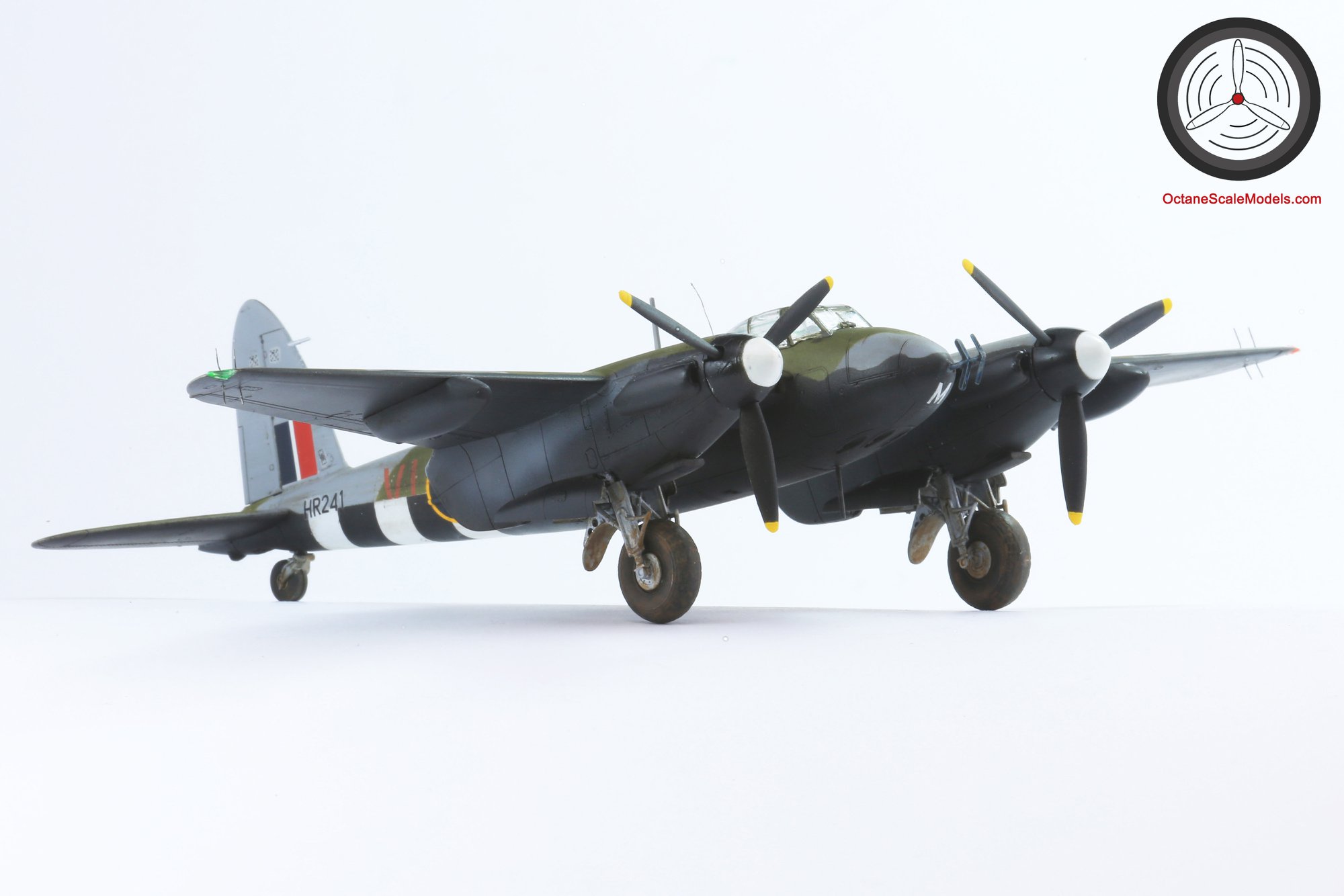 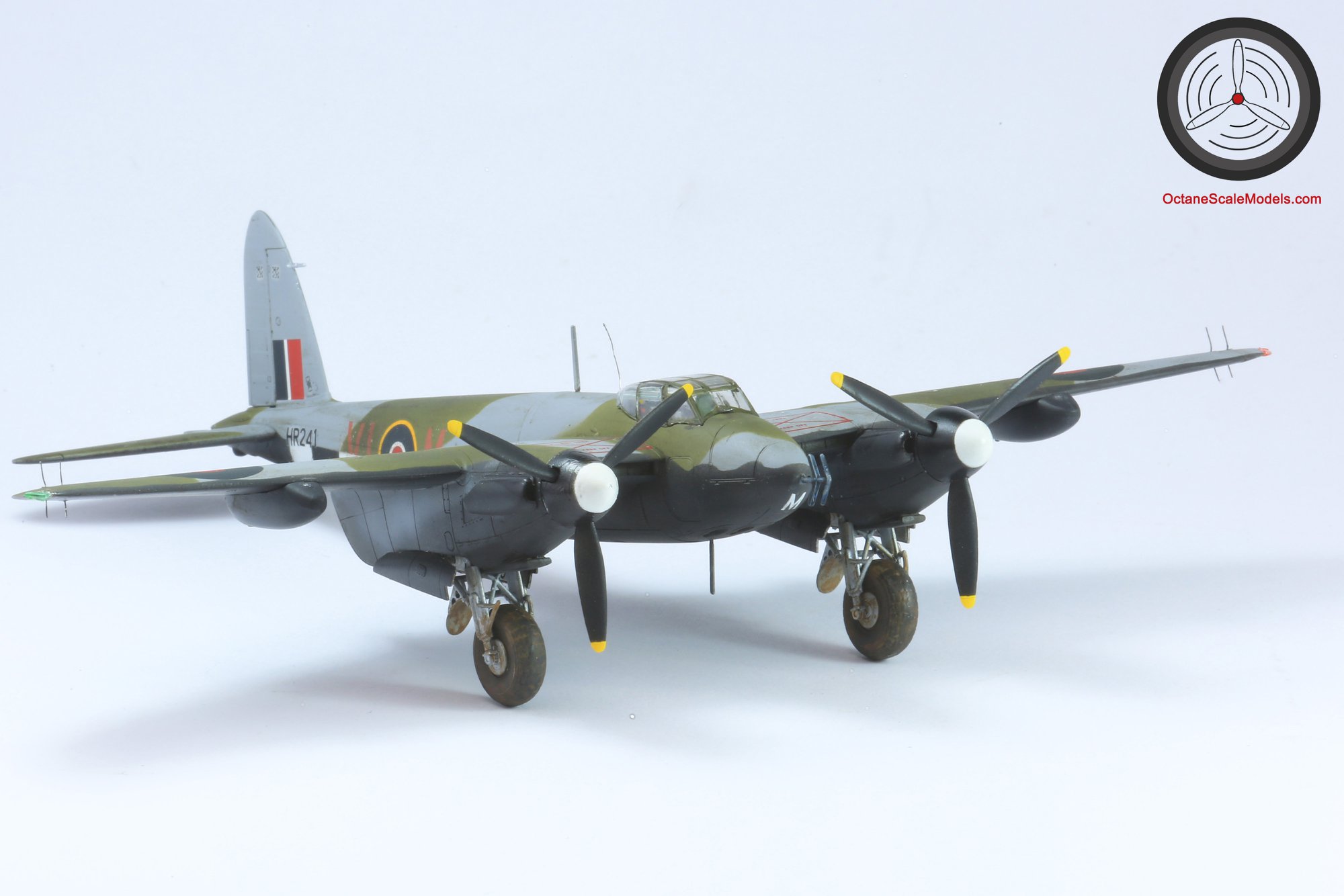 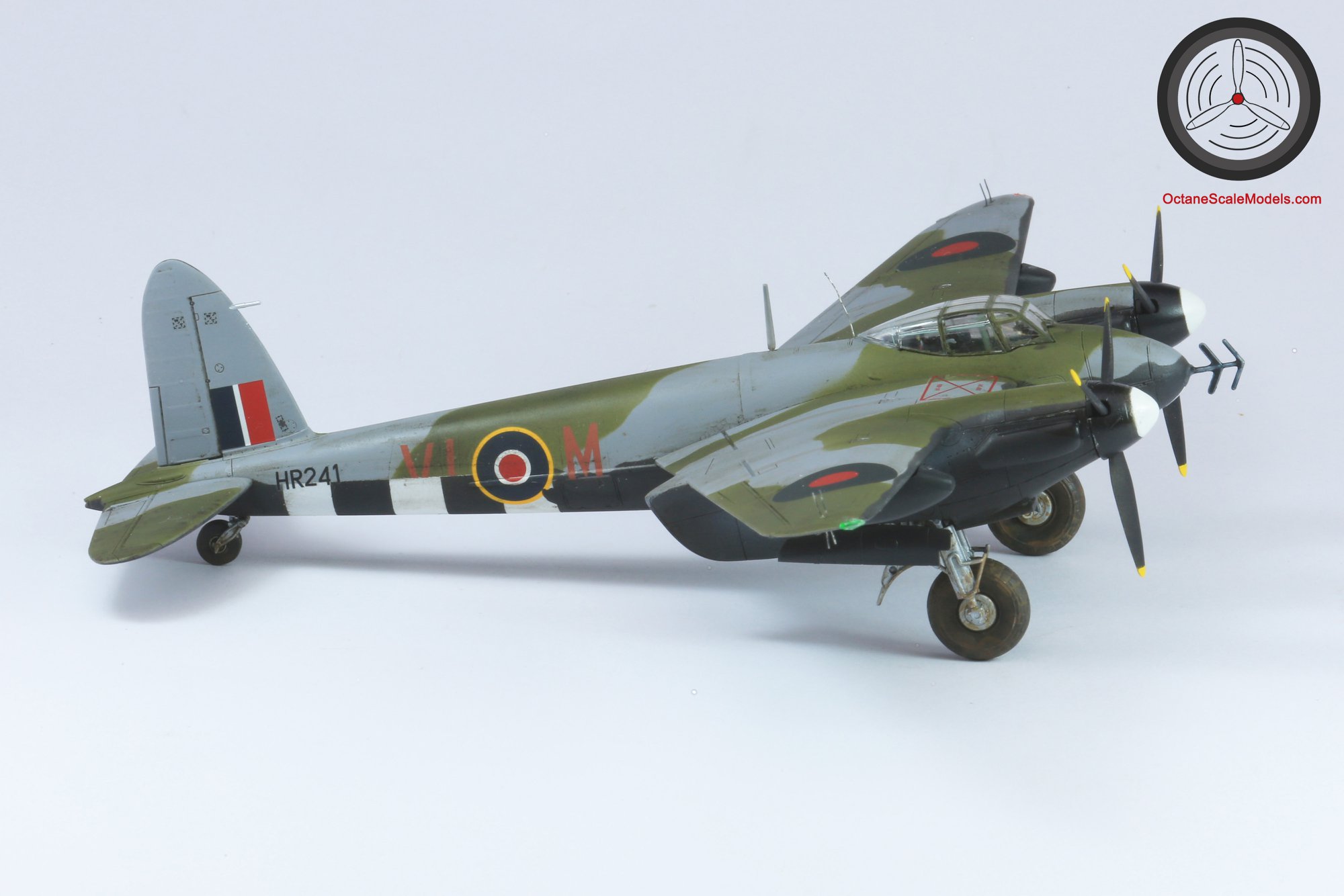 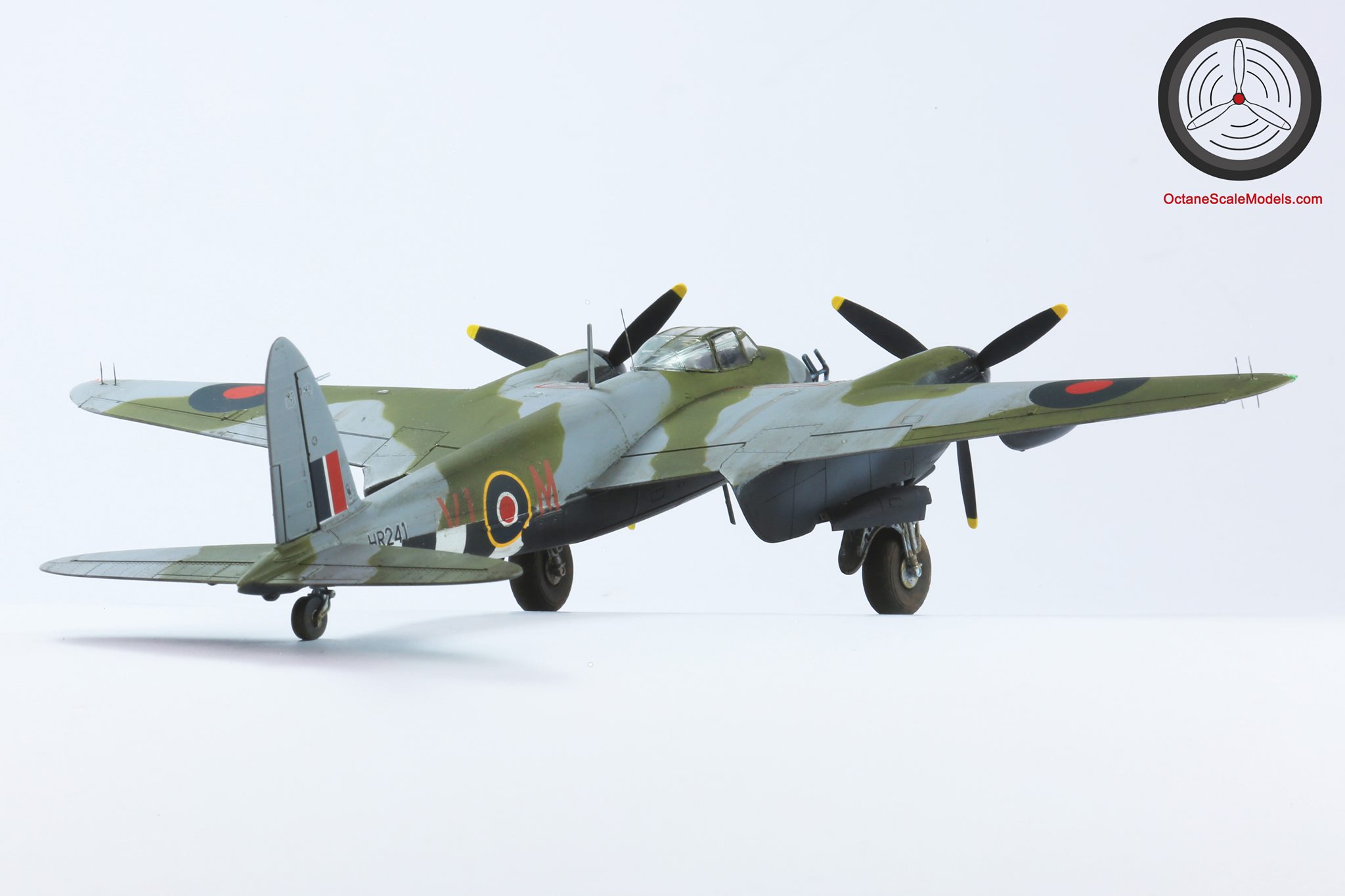 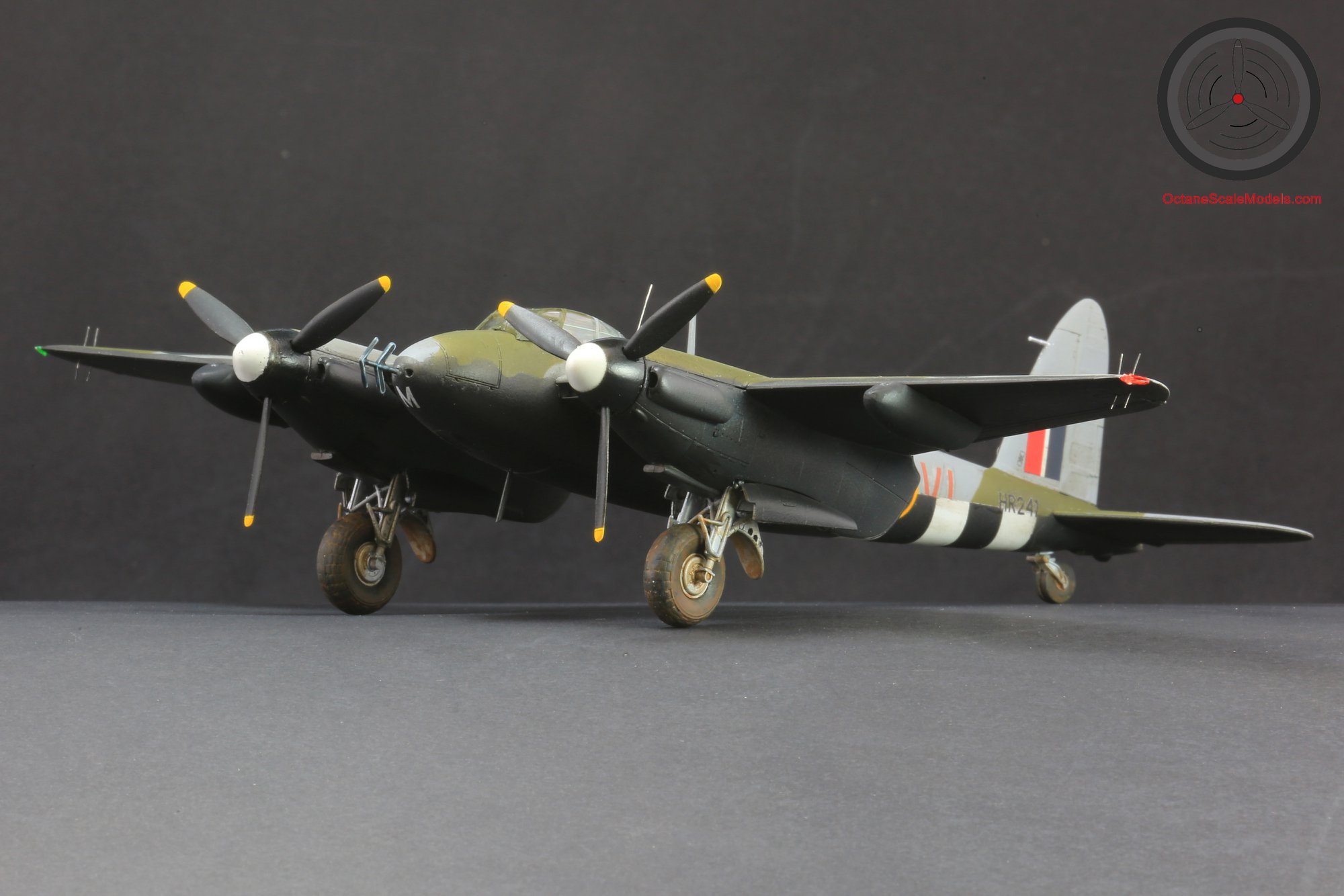 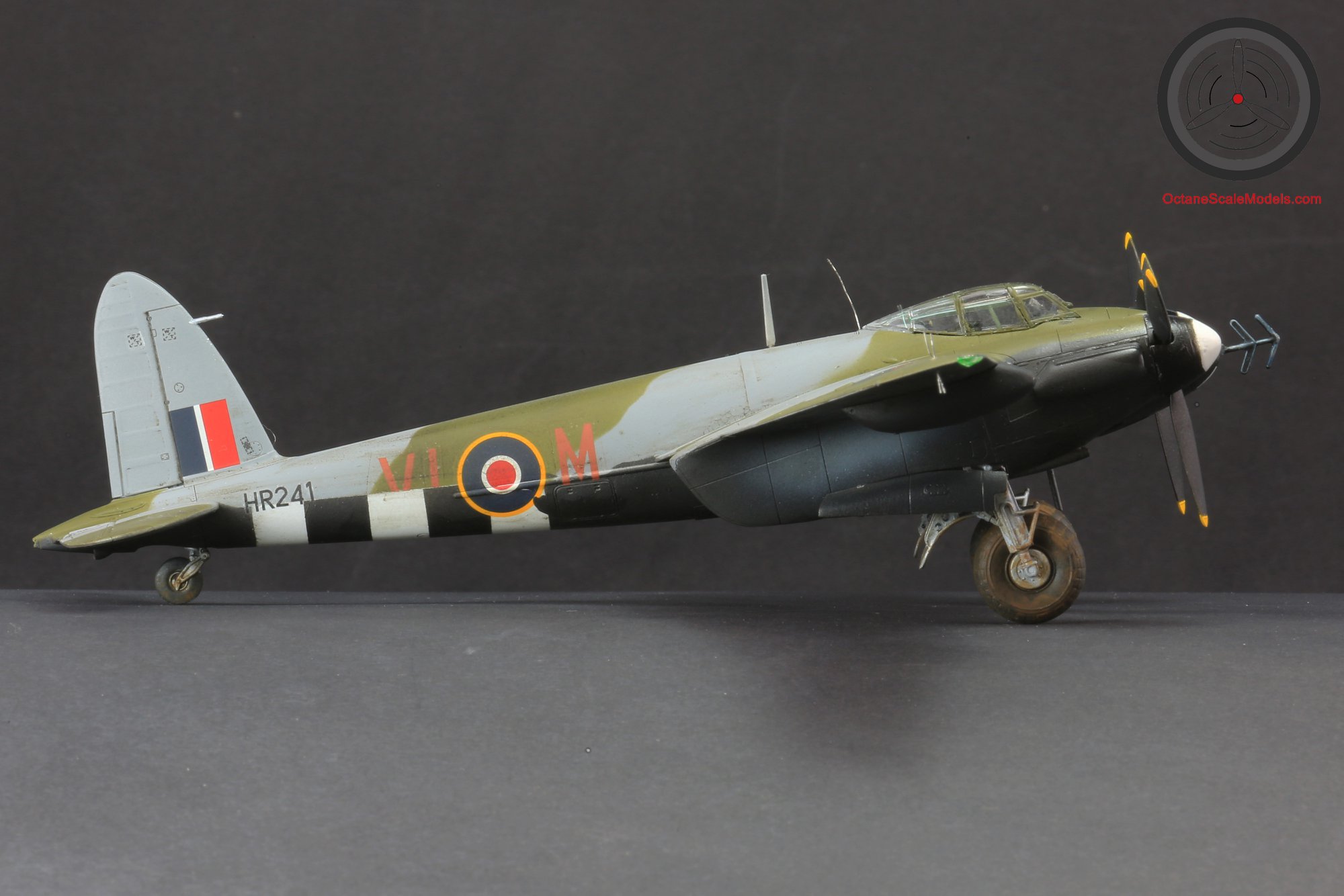 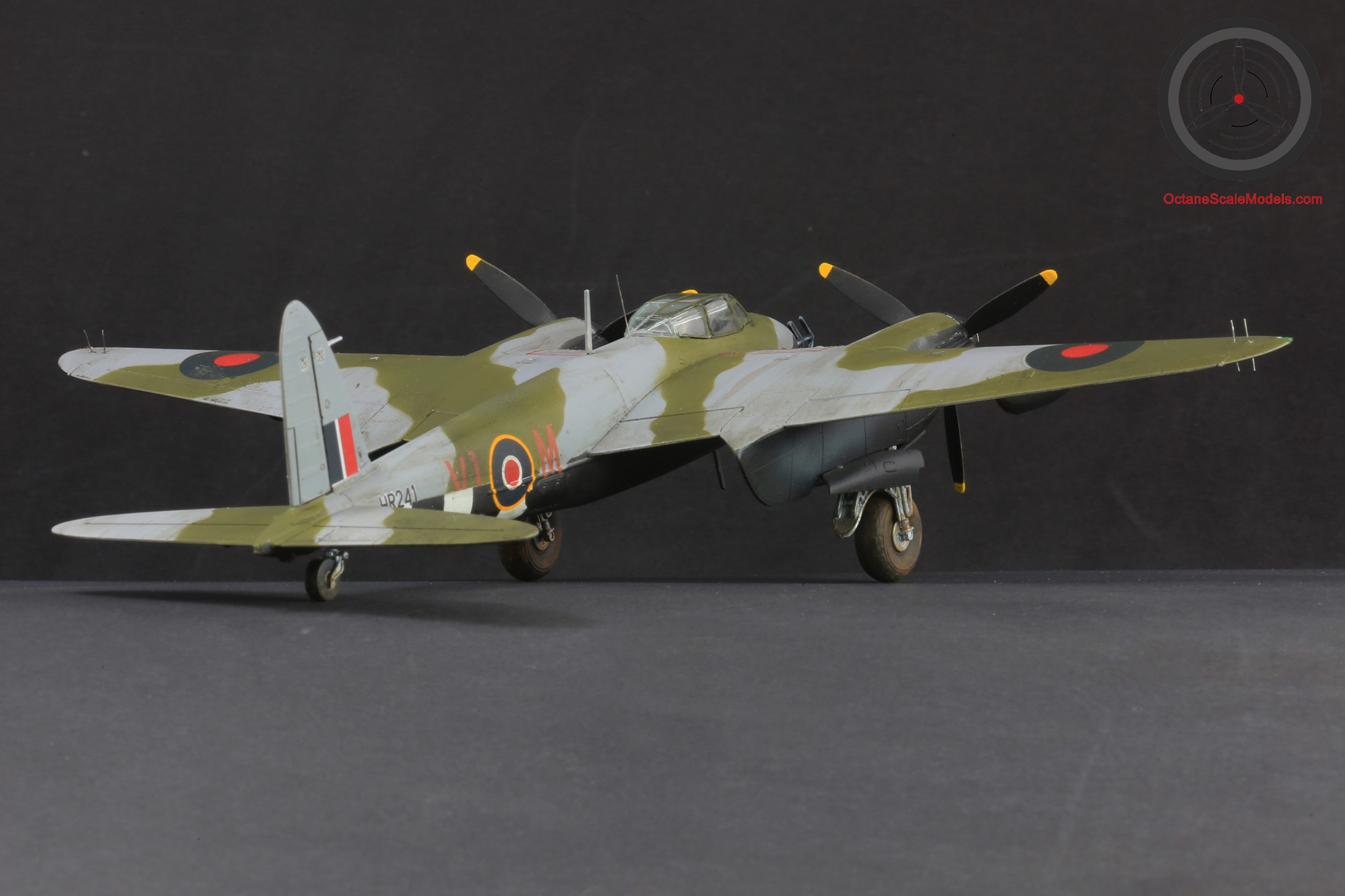 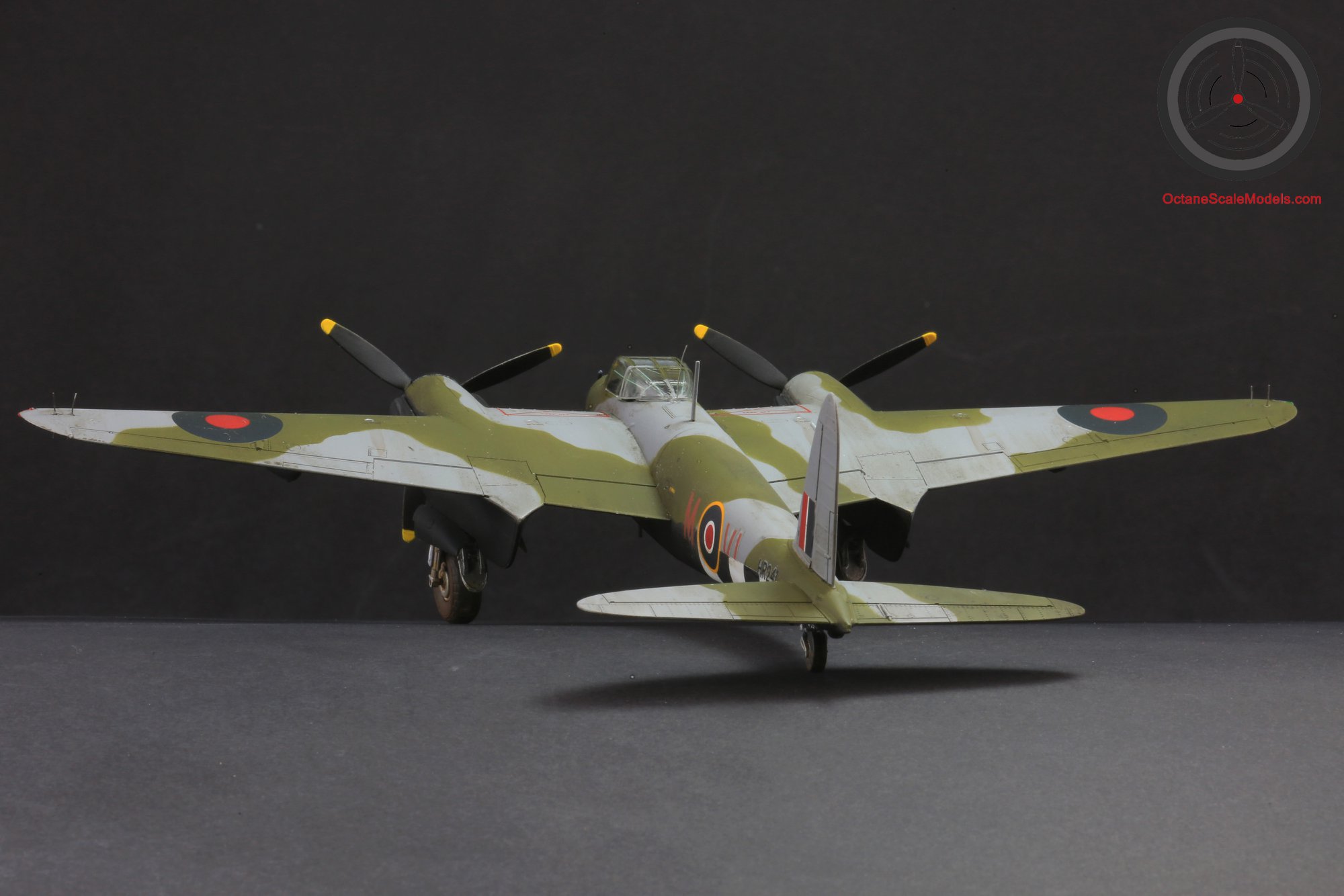 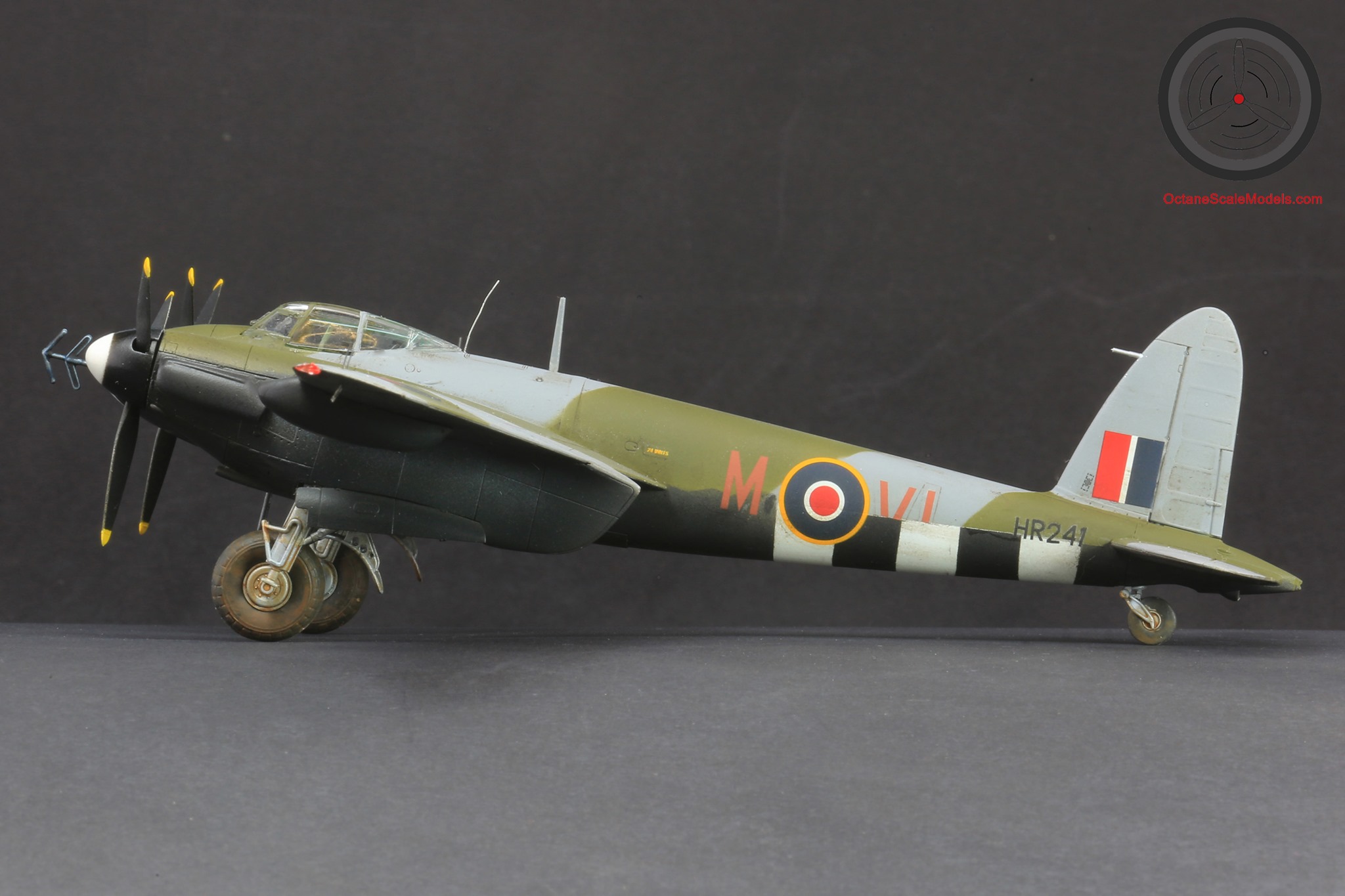 [Show thumbnails]
The Aircraft
HR241 was the 205th airframe from a batch of 500 Mosquito VIs placed on contract order 1680 and was built by Standard Motors, Coventry with Merlin 25 engines..This contract was delivered between 16th June 1943 and 17th December 1944 with HR241 being delivered to 27MU (Maintenance Unit) for post-delivery storage on 3rd June 1944 at RAF Hulavington Wiltshire; from here it went to 28MU to be brought up to spec for a 100Gp night raider on 8th July.
Its first line unit was 1692Flt based at RAF Little Snoring, Norfolk which was the Mosquito training flight for 100Gp specialising in night interceptions, bomber support and raider ops.
Initially the aircraft would have been painted in the standard night fighter scheme of all over Medium Sea Grey with Dark Green camo but a “Special Duties” scheme was approved for change at squadron level where the underside was pained in Smooth Night (a satin shade), as this was a unit modification each aircraft tends to be slightly different.
HR241 remained with the 1692Flt until 18th September when it was transferred to 169(SD)Sqn, also based at Little Snoring. This was a front line unit where it quickly had the Serrate and Perfectos homing equipment added to replace the AI.IV radar system (although they used the same antennae). The main difference externally was the deletion of the 4 nose mounted Brownings (the 4 cannon in the belly were retained) to make space for the new electronics.
Serrate was designed to home in on the German FuG 202/212 and 220 Lichtenstein airborne intercept radars in use by their night fighters and the additionally the Perfectos system triggered the Germans’ FuG 25A Erstling IFF system to get addition range and bearing information. The Serrate system was quoted as having between a 10 and 50 miles range depending on the aspect of the transmitting enemy radar. The Pefectos systems initially didn’t really live up to its name until the Series II came out in November 1944.
HR241 (VI-M “Mother”) remained with 169(SD)Sqn until the end of 1944, during which time it operated over the Reich at least 16 times: 2 Night Intruder operations, 11 Bomber Support mission, and support of 3 Spoof raids, I say at “least” because 2 pages from the 169Sqn Operational Records Books digitised by the National Archives are redacted during the time I am interested in!
Apart from a flight on 19th November (a Spoof raid on Munster) where it had to return and land at RAF Manston with an engine failure, its time on 169 Sqn was uneventful.
From the start of 1945 HR241 returned to training duties with 1692Flt as better equipped versions of night fighter Mosquitos came online, such as the Mk.XIX.
There is a note that the airframe returned to storage at Marshalls of Cambridge after the war and was eventually sold to the Turkish Airforce as “248” on 16th April 1947 where it was fitted with 4 blade propellers, (part of a batch of 10 T.III and 96 FB.VI bought by Turkey).
The Kit
1st released around 2000 this kit has been on the market for over 20 years now; this doesn’t show at all in the build as apart from some fettling at the rear of the nacelles there were very few if any further fit problems. One tip I found online was to leave the wing spar and cockpit section “floating” rather than being glued into place, as this eliminates any chance of a misaligned spar throwing out the wing fit.
The roundels and stencils came from the kit (the roundels are maybe a touch bright…?) and the remaining unit markings and serials came from the decal collection, the stripes were masked and sprayed to represent the Mosquito’s 24” stripes.
HR241 is shown as an illustration in Martin Streetly’s epic “The Aircraft of 100 Group” where for some unknown reason he gives the aircraft as belonging to 418Sqn which wasn’t even part of 100Gp… Fortunately the ORB of 169Sqn are now searchable and along with a clear photograph on Google these clearly show “Mother” as being on 169’s strength.
As usual this was painted in Hataka Orange Line lacquer paints, I used “NATO Black” rather than a pure RAL black to give a little more scope for wreathing later.