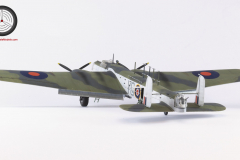 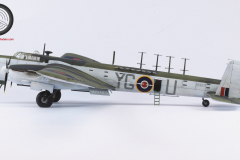 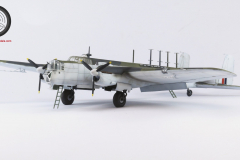 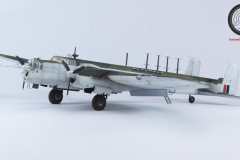 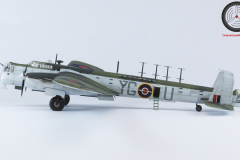 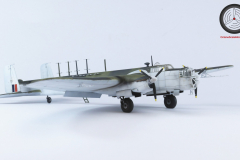 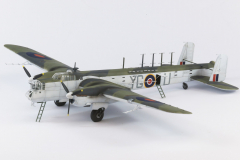 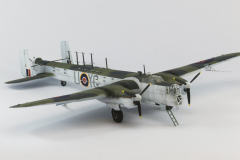 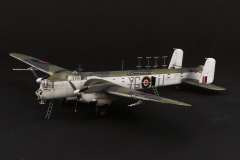 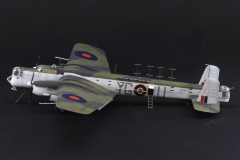 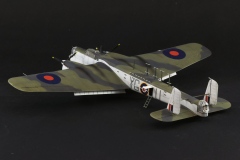 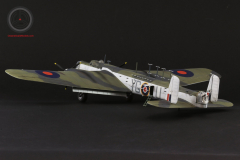 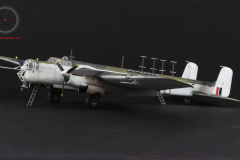 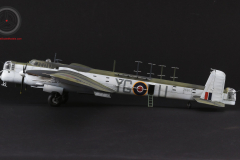 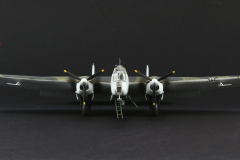 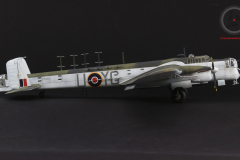 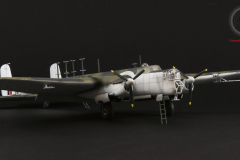 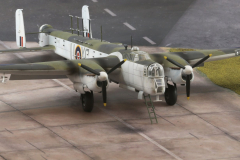 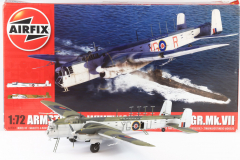 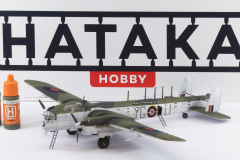 The Aircraft
Z6967 (YG-U) was delivered to the RAF towards the end of a mixed batch of 300 Armstrong Whitworth A.W.38 Whitley Vs and GR.VIIs under contract number B106912/40, probably between July 1941 and August 1941, it was dispatched straight to 502 (Ulster) Sqn which was at that time based at RAF Limavady, Co.Londonderry, Northern Ireland.
Assigned ID letter U for Uncle, on 24th November 1941, Z6967 was assigned to intercept and escort convoy SC.54 out of Cape Breton on its way into Liverpool and sweep for U-boats.
At this point I’ll hand over to a transcript from the Squadron’s Operational Record Book.
“a/c U502 (Z6967) was detailed to escort a convoy on 24/11/41, and was airborne at 0841 hrs. The convoy was not met, and at 1402 the a/c was recalled to base by Group. First land was sighted in bad visibility. This was thought to be the Southern extremity of the Hebrides, but in fact was almost certainly the Flannen Islands, further N-D was re-set several times and D/F fixes from Renfrew indicated the position at 1725 was an hour from base. Petrol shortage then became apparent. It was thought at first the gauge was faulty, but at 1750 after checks it was realised that fuel was running short. D.Cs were jettisoned and SOS was sent out at 1820, and the engines failed at 1848. The a/c was then at 1,800ft approaching the hills between Castlerock and Limavady, and the Captain, F/O.Collie, landed in a field near Priestland, 5 miles S.E. of Portrush. All the crew escaped injury. The airframe was damaged beyond repair, but the engines and airscrews were found to be repairable.”
The Squadron’s summary for the month gives a little more detail about the incident, at least about what sort of field it crash landed in…
“AS Sweep SC54”
c/v not met despite long search, recalled at 1400hrs. Sent SOS at 1820. At 1835 sent signal ‘20 gallons of petrol left’. At 1850 crash landed in potato field approx. 55.05 N 06.28 W.”
The crew on board were F/O Collie.D.B., Sgt.Bagley.R., Sgt.Murray.J., Sgt.Smith.S.A., Sgt.Sawer.S.C. and Sgt.Bacon.J.”
I can find no record of Z6967 in the Squadron’s operations logs prior to this flight so it may well have been its maiden operational flight….
The Whitley GR.VII was equipped with ASV.Mk.II Airborne Search Radar (the 1st aircraft mounted search radar to be used operationally by the RAF) and operated on 176 MHz. This system utilised the prominent “clothes rack” antennae which proved to be a source of a lot of drag. The Germans however also were quick to figure out how their U-boats were now being located and equipped their vessels with what it probably one of the world’s first Radar Warning Receivers which would give time for the submarine to dive when a radar equipped aircraft was in the area. The shift to the higher frequency ASV Mk.III in summer 1943 (which also dropped the huge fuselage mounted antenna arrays) soon negated this advantage in what was to be a technical game throughout the rest of the war.
Convoy SC.54 had departed Cape Breton on the 10th November with 70 ships spread amongst 12 columns, the convoy’s destination was Liverpool but ultimately the individual vessels’ destinations were all over the UK depending on where their cargos were needed. Due to the inclement weather that prevented Z6967 locating the convoy the voyage luckily proceeded without with loss to the Wolfpacks; however the following notes are to be found against various vessels on the convoy: Agios Vlasios returned to St.John with a shifted cargo and needing boiler repairs, Monasses/Empire Windrell returned to Sydney, Nova Scotia, Empire Wildebeest ran short of fuel and Sylvia de Larrinaga returned to port. At the time that 502Sqn aircraft was due to give cover to the convoy the surface escorts were as follows: HMS Broke (D83) – (Thorneycroft type Destroyer Leader), HMS Wolverine (D78) – (W Class Destroyer), HMS Begonia (K66) – (Flower class corvette), HMCS Brandon (K149) – (Flower class corvette), Eglantine (Norwegian Navy) – (Flower class corvette), HMS Larkspur (K82) – (Flower class corvette) and Montbretia (Norwegian Navy) – (Flower class corvette).The convoy arrived in Liverpool on 26th November.
The Kit.
This is of course Airfix’ new tool Whitley (the 2nd variation of it, the 1st being a Mk.V bomber). As well as being Coastal Command, the fact that the kit featured an aircraft from RAF Limavady drew me too it (as my wife went to college there – all be it a LONG time later

and I’m also a member of the Ulster Aviation Society). As there no Whitleys left for LIDAR scanning I guess that Airfix went back to drawings to design the kit, and to my mind they have got the shape pretty much spot on (that is probably the last time you will see the word “pretty” used in a Whitley kit review though

The aircraft featured on Airfix decal sheet (YG-R) seems to have been a favourite of kit manufacturers over the years with Frog and their various incarnations having also used those ID letters. However Frog etc have the serial EB392 assigned to the aircraft which seems to be OK as it was a Whitley GR.VII on the strength of 502 Sqn, however their claim that it was Ireland based seem a little wide of the mark as 502 had moved to Cornwall by the time EB502 was delivered. Airfix also claim their aircraft is based at RAF Limavady (Ireland) in November 1941, and have indeed changed the serial number to BD572; all well and good, but this aircraft also wasn’t delivered until AFTER 502 had left Ireland…. The red unit ID decals YG-R also match a 1942 spec aircraft, in 1941 grey lettering seems to be in force. Not to fear, a little internet trawling and a decal bash and the RAF Limavady based aircraft appeared – Z6967 YG-U (in grey

). Talking of slightly off colour instructions, the kit gives a call for the whole interior and flaps to be interior green, it seems that only the cockpit and forward section was this colour, the remainder being aluminium. The undercarriage should also be black, not silver…. Only small points, but as the information is widely available it seems a shame that Airfix missed it…
Decal and interior colour research aside, the kit built very well; the assembly is a little unconventional with the fuselage being spilt into 2 main sections, ahead and aft of the wing, and the aft section comprising of 3 pieces (top and the 2 lower sides). This is a little tricky to get assembled but some careful dry fitting and patience will give a good result. The wing root bomb bays are moulded closed but the main fuselage ones can be posed open or closed, and come with a choice of 500lb Depth Charges (blunt nose) or conventional 500lb General Purpose bombs.
The Whitley was a stalwart of the early war heavy bomber force (until the REALLY heavy bombers came on stream) and really deserves a place in Bomber and Coastal Command model lineups.