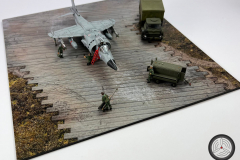 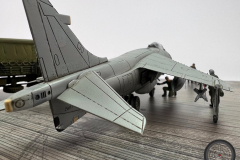 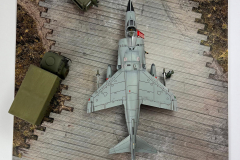 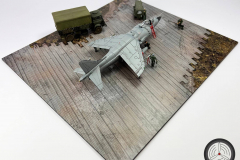 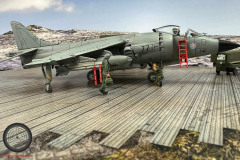 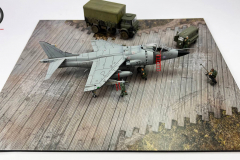 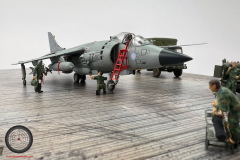 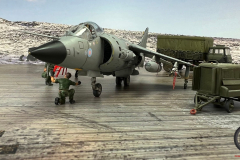 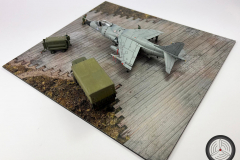 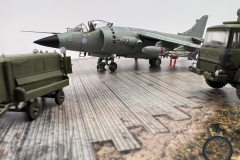 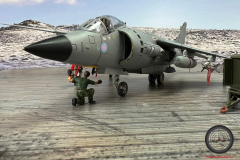 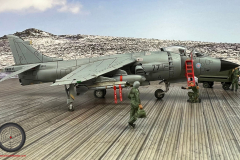 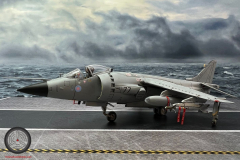 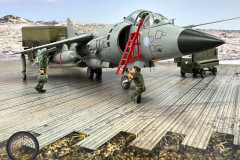 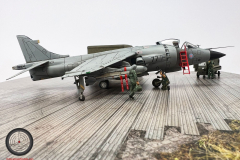 The Aircraft
ZA177 first flew on 5th December 1981 and was delivered to the Fleet Air Arm just over a month later on 6th January 1982.
On 1 May 1982, after the Argentine invasion of the Falkland Islands, ZA177 departed RNAS Yeovilton, refuelled from an RAF Marham based Victor and landed at Ascension island. Having shipped to the South Atlantic onboard the ill-fated Atlantic Conveyor ZA177 transferred across to HMS Hermes and 18 May. About this time the ROYAL NAVY script and Sqn badge on the tail were painted out to match the main Medium Sea Grey colour; it was nominally assigned to RAF pilot Flt. Lt. David Morgan who was part of the Hermes Carrier Wing.
On 8 Jun 1982 Dave Morgan shot down 2 Argentine Skyhawks in ZA177 over Choiseul Sound (his wingman Lt David Smith claimed a third). The aircraft returned to the UK onboard HMS Hermes on 21 Jul 1982.
The aircraft didn’t remain active long though, being written off 21 Jan 1983 after crashing at Cattistock near Dorchester narrowly missing a housing estate following failure to recover from a spin, the pilot (Lt.Fox) ejected safely.
The Kit
The kit is Airfix’ 1:72 BAe Sea Harrier FRS.1, first released back in 2010 with 700A and 801 Sqn UK based aircraft decals and a decal option for an 899 Sqn aircraft used in the Falklands; their next FRS.1 was the one that this is based on which was released for the 30th anniversary of the Falklands Conflict – this was a dual boxing of David Morgan’s FRS.1 and an Argentine Air Force A-4P Skyhawk in a “Dogfight Doubles” box. Apart from the addition of a brass pitot, a resin seat, remove before flight tags and a ladder, the kit was built out of the box with the Medium Sea Grey and Barley Grey coving from Hataka’s Orange Line Lacquer paints as usual. The kit is due for a re-release very soon and will carry 2 decal options from the Falklands, one from the Hermes Air Group and another from the Invincible Air Group – although not (so far) marketed as such, this will be the 40th anniversary of the Falklands Conflict. As a 12 year old kit the engraved panel lines are a bit on the heavy side (Airfix have got much better since then), but I still rate it as a bit better than the Italeri/Esci versions of the time period (some people’s views may differ…) and it is streets ahead of the Hasegawa and Matchbox offerings.
I depicted the aircraft as it would probably have appeared right after the end of the conflict with the 2 kill marks on the port side of the cockpit and paint wear starting to show the original tail markings through the grey overpaint; the fuel tanks were also starting to show wear with the original EDSG/White paint showing through at the tank tips. (a photo exists of ZA177 on deck of the Hermes on return to the UK and these paint anomalies can all be seen on that). The forward gear doors and airbrake have also been built open as the aircraft in the photo is also configured like that.
The paint scheme is referred to as the “Barley Scheme” which is a bit odd as only the underside of the wings and tail are painted this colour – the remainder is Medium Sea Grey.
The few aftermarket bits used are a Martin Baker Mk.10H (a type unique to the Sea Harrier I believe) from Pavla (S72060), remove before flight tags from Eduard (72008), a turned brass pitot from Master (AM-72-052) and a crew access ladder from the long defunct PP Aeroparts (AL717 – also fits the Hunter). As mentioned before, the paints are Hataka‘s Medium Sea Grey and Barley Grey from their excellent Orange Line Lacquer paints (my standard “go to range”)– with many of their other shades used throughput the build. The bases and backdrop can be sourced from Coastal Kits Display Bases and really make the model come to life.