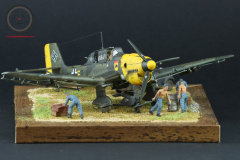 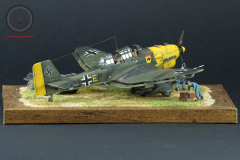 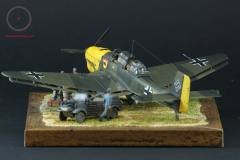 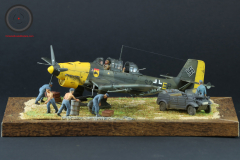 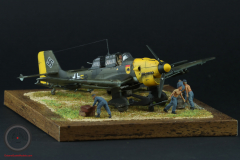 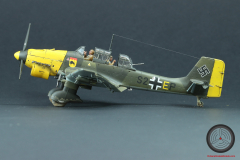 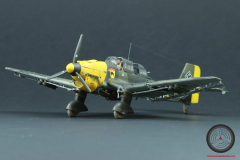 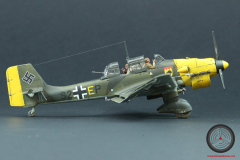 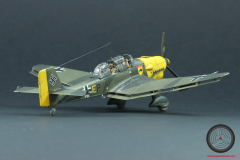 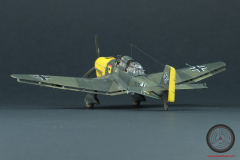 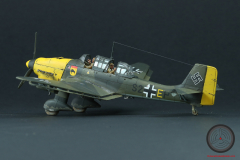 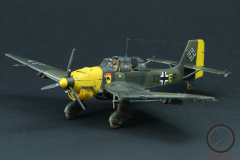 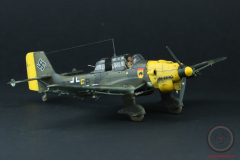 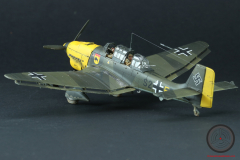 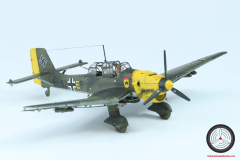 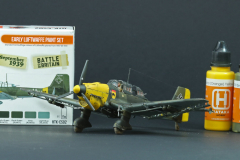 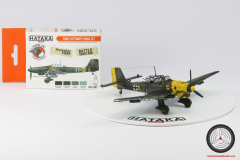 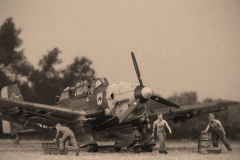 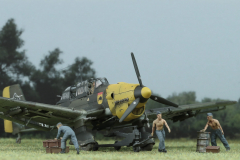 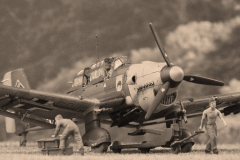 1 2 ►
The History
StG77 (Sturzkampfgeschwader 77) was heavily committed to the early phases of the German invasion of Poland, the low countries and France in 1939 and 1940 and was also assigned to the build-up and initial phases of Operation Sealion (the invasion of Britain).
Initially tasked with attacking English Channel shipping during the “Kanalkampf” in July 1940, StG77’s early successes initially continued; however, after August 13th 1940 as the attacks on southern Britain itself became the focus of operations to try to eliminate the RAF’s Fighter Command and gaining air superiority over Southern England (Operation “Adlertag”) the Stuka’s vulnerability to modern fighters and RAF tactics became horrendously apparent.
5 days later, StG77 committed 109 Stukas to the raids on RAF Ford and the Poling radar station. Of the 109 Stukas I./StG77 lost 10 with another damaged beyond repair, II./StG77 lost 3 with one damaged beyond repair and III./StG77 lost 2 with a further 2 damaged (19 aircraft lost from the initial 109). With the loss of 26 crew (including the CO), six taken prisoner, and six wounded the unit’s losses were considered unacceptable and the Stuka was withdrawn from the campaign.
StG77 would later go on to fight in the Balkans and Russia until October 1943 when the unit was disbanded and merged into SG10 (Schlachtgeschwader 10) and SG77 (Schlachtgeschwader 77).
The kit
Airfix released their new tool 1:72 Stuka back in 2016 as the B-1 version, they later released B-2, B-2 Trop and R-2 versions. This build was based on the newly issued A03087A release with decals from Xtradecal to portray a Battle of Britain B-1. It builds VERY well and the crew figures are very well detailed (I was planned to omit the figures and use the optional pilot’s seat part with moulded on seatbelts, but the detail was too good to consign them to the spare parts box).
The kit is tooled with the engine compartment separate (handy in this case for spraying the yellow

), so the different B-2/R-2 radiator cooling and exhausts can be added with the change of a small sprue – nice design. The main sprues also come with fuel tanks which are only fitted to the R-2 version, DON’T be tempted to fit them to a B-1 or B-2….
Other sprue options are 4x SC25 bombs, 1x SC250 and 1x SC500 along with the “Jericho Trumpet” sirens present, faired over or completed omitted. Tempting as it is to fit all options possible it seems that if the 4x SC25 bombs were carried under the wings then the central bomb was limited to the SC250 (I could be wrong there), fuel tanks (as previously mentioned) were only fitted to the R-2 and the “Jericho Trumpets” although being a famous Stuka feature do not appear on many period photos (they took 10kts off of the already low top speed).
Luckily a detailed photo exists of S2+EP (included in the gallery) during this short phase of StG77’s history and this shows the Jericho Trumpets fitted. The decal sheet doesn’t show the yellow rudder (pretty much standard on most Luftwaffe units as part of their aerial ID markings) – and the rudder is out of shot on my reference photo but a blurry image purporting to be StG77 in France does show it… so my kit has it… (actually of you look to the extreme left of the reference photo there is a lighter patch just behind the tailwheel which could well be the base of the yellow rudder – good enough for me anyway….).
As usual I painted this in Hataka Orange Line lacquers (from their 2nd set, HTK-C002 which covers the early Luftwaffe main colours). I added Hataka’s RLM04 for the nose and rudder and their RAL6006 (the modern designation of Field Grey) for the ordnance.
The base was scratch built using a 6×4 supermarket picture frame, the back drops are either from Coastal Kits Display Bases or a generic paper railway background. The Kubelwagen comes from Academy and the ground crew from Zvezda – Model Kits (both lovely kits)