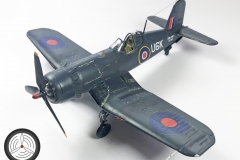 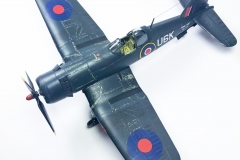 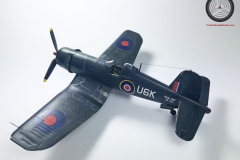 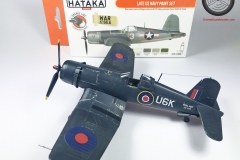 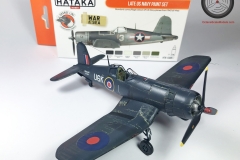 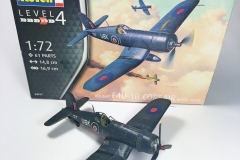 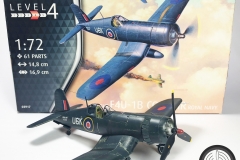 KD344 was one of the final batch of 857 Goodyear built Corsairs, called the FG-1 Corsair IV in Fleet Air Arm use. It was delivered to the Fleet Air Arm and was embarked on board HMS Colossus after she completed her sea trials and sailed for Ceylon (now Sri Lanka) on 12 March 1945. After 2 months of operations in the Mediterranean the Colossus transited the Suez canal an sailed to Ceylon arriving on 13 June.

Arriving too late to take part in offensive operations the Colossus as part of11th Aircraft Carrier Squadron never-the-less assisted in the liberation of Hing Kong and the ferrying of former prisoners of war back to Ceylon.

On 8th July 1945 KD344 is reported as ending up in the barriers with Sub-Lt J.D. Garden RNVR flying when the hook jumped the arrestor wire.

The Corsairs and Barracudas were offloaded on 17th January 1946 to Royal Naval Air Station Wingfield near Capetown, they were re-embarked in April.

In July of the same year the Colossus was transferred on a 5 year loan to the French Navy as the Arromanches, which later became a permanent transfer.

It’s a lovely kit to build, no real dramas at all! I finished it off in Hataka paints, 1st of all their silver and US primer green as an undercoat with their “Orange Line” lacquer paints and then a top coat of “Red Line” Acrylic ANA623  Sea Blue. This 2018 release is a reissue of their 2014 tooled F4U-1A (03983) but with an extra sprue added with the FAA clipped wingtips.

As the under coat lacquer dries rock hard and the top coat acrylic remains soft for a while I was able to scratch through to the primer and “bare metal” with a wooden cocktail stick. I used the FAA Corsair in the FAA Museum in the UK as a guide for this as they have had the new layers of paint carefully removed to show the original war finish complete with scratches etc…