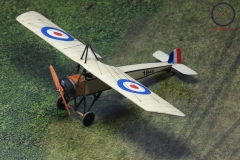 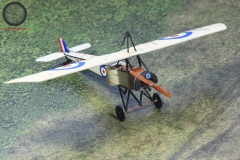 The Morane-Saulinier L entered service with the Royal Flying Corps at the start of WWI also being employed in service with the Royal Naval Air Service and the Aeronautique Militaire (French Air Force). It was flown in single and 2 seat configurations, firstly as an unarmed scout/recon aircraft and latterly as an armed fighter,

The L was later replaced by the LA which featured a more streamlined fuselage and aileron controls rather than the wing warping of the Type L. Interestingly the type was actually flown by both sides in the war as the Bavarian Air Service flew 60 licensed built versions known as the Pflaz A.I , A.II and E.III. The Swedes also flew their own version which was named the Thulin D.

The type’s fame was mostly earned with the exploits of Roland Garros of the Aeronautique Militaire who in March 1915 developed a forward through the prop firing machine gun (using deflector plates rather than synchronised firing) and Flight Sub-Lieutenant Reginald Alexander John Warneford of 1 Squadron RNAS who whilst flying an “L” was the first pilot to shoot down a zeppelin (LZ.37 on June 7th 1915) for which he was awarded a Victoria Cross

Although these actions dominate the history books for the type it should be noted that one of the RFC’s earliest air to air victories was recorded by a 2 seat Morane L of 3 Sqn on 5th February 1915 flown by Lt.Vivian Hugh Nicolas Wadham with observer Lt.Arthur Drummond Borton flying in #1848. Although the aircraft itself was unarmed they managed to force down an Aviatik near Merville with rifle fire from a range of 15metres.

The pair crashed a few days later in #1848 when forced down themselves. Wadham breaking his thigh and Borton breaking his neck in three places.

Lt.Wadham was one of the 1st pilots of the RFC operating in France , flying a Bleriot of A Flt 3 Sqn on 12th August 1914 along with 3 other crews in Bleriots and 4 crews in Farmans. He was killed in action less than a year after his victory in #1848 on 17th January 1916 aged 24 whilst making a forced landing near Passendale in BE2C (2105) of 15Sqn where he by then a Flight commander (probably shot down by Warrant Officer Krause and Leutnant von Lersner of Kagohl 1).

Lt.Borton went on to become a Lt.Col. Commanding 2nd/22nd Bn London Regiment in Palestine in 1917 where he was awarded a VC. He was the older brother of Air Vice Marshal Amyas Borton. Having previously served in the Boer War he went on to fight in the Russian Civil war, His awards are listed as Victoria Cross, Companion of the Order of St Michael and St George, Companion of the Distinguished Service Order, Order of the Nile (Egypt), Order of St. Vladimir (Russia). He died 5th January 1933 in Southwold, Suffolk.

This was actually built from an AZ Model of a Pflaz A.I/II, which only differs from their Morane L kit by the decal sheet (containing engine/armament and alternate landing gear for both the German versions and early and late Moranes), the RFC decals came from the decal bank and the serial numbers and underwing Union Flags (not seen on these photos) were home printed.

Being a low production release as is common with AZ models there are no location pins to aid in lining up the components – to be honest this isn’t a huge setback is only the 2 fuselage side would have benefitted from them as all other parts are attached to this. The wing supports and undercarriage require some very careful lining up though and the wing in particular remains quite fragile as its only contact area is through 3 struts joining the lower surface to the fuselage.

Rigging was applied using my usual EZ-line and the model painted in Xtracolor Clear Doped Linen. The wooden areas were left beige with a red/brown grain pattern applied which was then top coated with Tamiya Clear Orange.