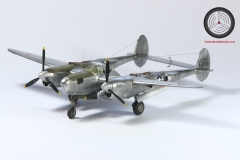 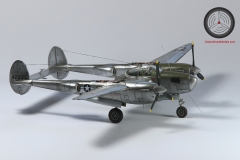 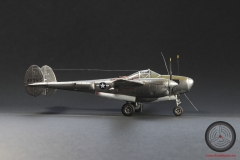 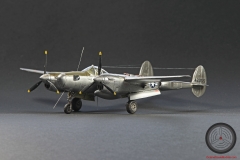 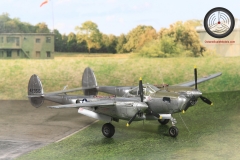 Between Sept 1944 and Feb 1945 4 P-38J “droop snoots” with an ELINT conversion were seconded from the USAAF’s 7th Photo Recon Group to 192sqn of 100gp RAF based at RAF Foulsham in Norfolk, where they were assigned to hunt for guidance signals for the V-2 rockets on “Big Ben” missions.

On 26 October 1944, Capt Fred B.Brink jr and 2nd Lt Francis Kunze were flying such a mission in 44-23515 over the Dutch coast when the aircraft suffered a double engine failure. They radioed back to say they had decided to try to glide back to England but were not heard from again, despite a search by other aircraft from 192sqn only a few pieces of wreckage and an oil slick were found along their expected route and both crew were listed as KIA.

Poignantly it was discovered after the war that the search for the V-2s radio guidance was always doomed to failure as it operated one if the world’s 1st gyro based Inertial Guidance Systems.