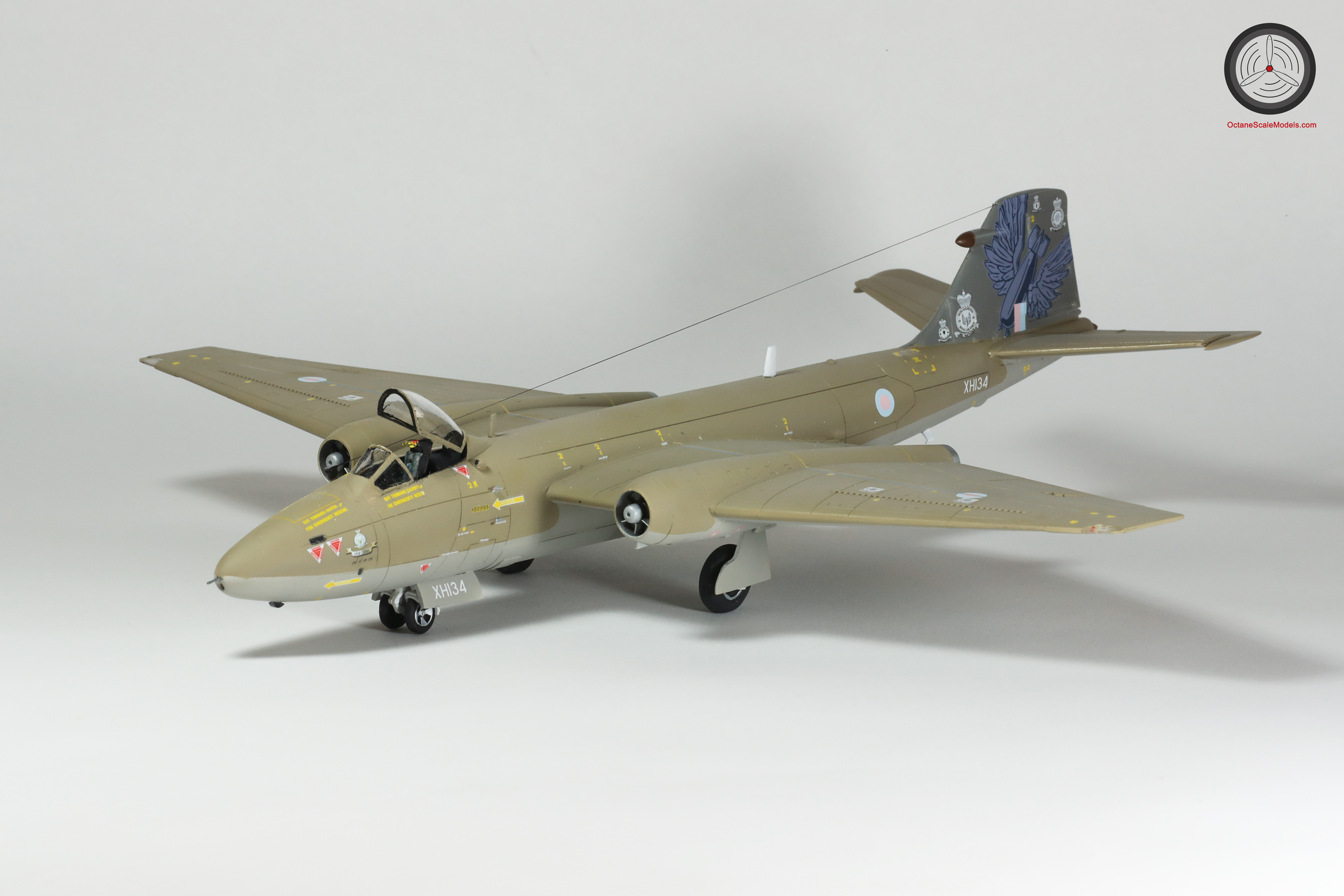 The Canberra first entered RAF service in 1951 after its first flight on 13th May 1949 (only 4 years after the end of the Second World War) following the publication of Air Ministry requirement in 1946 (PR.31/46) that was looking for a replacement for the Mosquito. Even though it was designed as a medium bomber its performance was remarkable – outperforming many of the latest fighters of the time. In 1951 it set a record as being the first jet-powered aircraft to cross to Atlantic non-stop.

The first dedicated recon version (the PR3) entered service in December 1952 with a 14inch stretched fuselage to hold camera kit and extra fuel. The PR7 followed soon after with uprated Avon 109 engines followed by the “definitive” PhotoRecon version the PR9 in 1958… A total of 23 of this version were built (only 21 entering service, as one was written off prior to delivery and one converted to the one and only SC9 – more on THAT particular aircraft in an upcoming build).

The PR9 had a longer wingspan and elongated inner chord enabling ever higher altitudes to be reached – in excess of 60,000ft is the declared figure… (in fact in 1957 a Canberra held the world altitude record at 70,310ft). There is a apocryphal (and completely unconfirmed…) story of a USAF commander bragging that they could overfly and photograph the British Houses of Parliament with one of their U2 spy planes with the RAF not being able to do anything about it, and delivering said images to the RAF only to receive a return set of prints of the U2 taken from above whilst it was taking its photos of the Houses of Parliament – taken by a Canberra).

First developed and produced by English Electric (apart from the PR9 which was built under license by Shorts of Belfast), the programme became part of BAC (British Aircraft Corporation) in 1960 after a merger with Vickers, Bristol and Hunting and then in 1977 this was nationalised as British Aerospace (BAe) along with Hawker Siddeley and Scottish Aviation.

Several programs were put forward over the years as a Canberra replacement, notably the TSR2 and later on the MRCA (Tornado) – [Must Replace Canberra Again]; ultimately though it was the arrival of the RAPTOR pod for the Tornado during operation Telic in 2003 and its subsequent success that did away with the RAF’s need for a specialised squadron operating a dedicated PR aircraft. (Small note – we don’t seem to have anything lined up to replace the Tornado/RAPTOR combo though once the Tornado retires…)

As expected with such a long serving recon aircraft, the camera, electronics and navigation equipment fit changed though the years due to constantly evolving technology and operational requirements but with only minimal airframe changes.

As well as “conventional” strategic recon, the PR9 is also known to have been used over Northern Ireland during the ‘Troubles” using false colour photography to locate IRA arms dumps during Operation Motorman in July 1972, during the Bosnian war of the 90s looking for mass graves and in the First Congo War where it was used to look for refugees, the last two using IR cameras. Apparently several PR9s were also sent down to Chile via Belize during the Falklands conflict and were operated by the RAF in Chilean Air Force markings, 3 of these aircraft were “donated” to Chile after the war was over.

After entering service in 1958 the PR9’s final sortie took place from RAF Marham on 28th July 2006 (after the conclusion of Operation Herrick), the final flight was conducted by XH134 from 39 Squadron (1 PRU) in a special livery marked up as “The end of an Era 1916-2006” to signify the standing down of 39 Sqn along with the Canberra’s retirement. The aircraft did fly at RIAT later on that year though but with different antennae to its final operational flight, which probably means a lot of the recon/ELINT kit had already been removed.

The “End of an era”? – well not really – in March 2007 (only 7 months after it was disbanded) 39 Sqn was reformed from 1115 Flight at Creech Air Force Base in Nevada, A-Flight flying the MQ1 Predator and later on B-Flight operating the MQ9 Reaper – a role they still operate in.

I was lucky enough to pick up this kit VERY cheap without box, decals or instructions but still sealed in its bags. I bought of a set of Model Alliance (now defunct) decals for the retirement scheme and a seat of the airframe stencils. And after a little while decided to do a quick build – that was 4 weeks ago…..

The kit fits like a dream, but being one of Airfix’s first new tools does suffer a little from slightly trench-like panel lines. All the injector pin mark locations have been well thought out and are not visible when complete, I haven’t found and sink marks on the surface either. The kit gives options of builds of different spec PR9s from the 1960s though to the 2000s (different antennae), but if you have a specific aircraft in mind I would recommend looking up as much research as you can as the antennae and camera layout varied frequently depending on the mission. The kit actually comes with alternative camera bay layouts and early or late RWR configurations.

On a “rivet counter” view, many of the lines on the rudder need mostly filling and the fillet in front of the tail is too long which needs a little work – plenty of plastic depth is available here to play with though whilst reshaping. As mentioned earlier, check the antenna positions and types if you have a specific airframe/time in mind. Some of the panel lines could do with a slight fill too, although once painted they are not too bad.

As well as the Model Alliance decals for the retirement livery and the stencils the kit was airbrushed with Xtracrylics Hemp (top sides), Light Aircraft Grey (undersides) and Medium Sea Grey (special tail livery). As the aircraft was a “show baby” I have not applied any weathering.

The only “coke can” scratch built bits were limited to the navigator’s viewing periscope (underside of nose), various antennae seen in photos of the disbandment aircraft and the 3 extended covers inside each engine intake.

The ejector seats supplied with the kit are about the right size and shape but not overly detailed, I replaced the pilot’s seat with a resin alternative as it is so prominent. The cockpit itself is I believe the wrong design, the kit seems to use the cockpit from the B(I)8 model (which came out the year before), this isn’t just a switch position thing though, The B(I)8 has the navigator sat alongside the pilot (but inside the fuselage) whereas the PR9 should have the navigator’s ejector set in the nose… Fairly academic though as you can’t really see the 2nd seat anyway….(I didn’t fit it at all). The wheels are moulded with weights on the tyres and the canopy can be positioned open or closed. The 4 flap sections can be positioned opened or closed.

One word of advice, the instructions call for a very substantial 45 grams of weights to be fitted above the nose gear bay, I found this to be not quite enough and added about another 6 or 7 grams in the nose itself to stop the model tail sitting

All in all an enjoyable kit to build and finish off, I do have another in the stash (also acquired without box or decals) which will be built up as the aforementioned SC9.