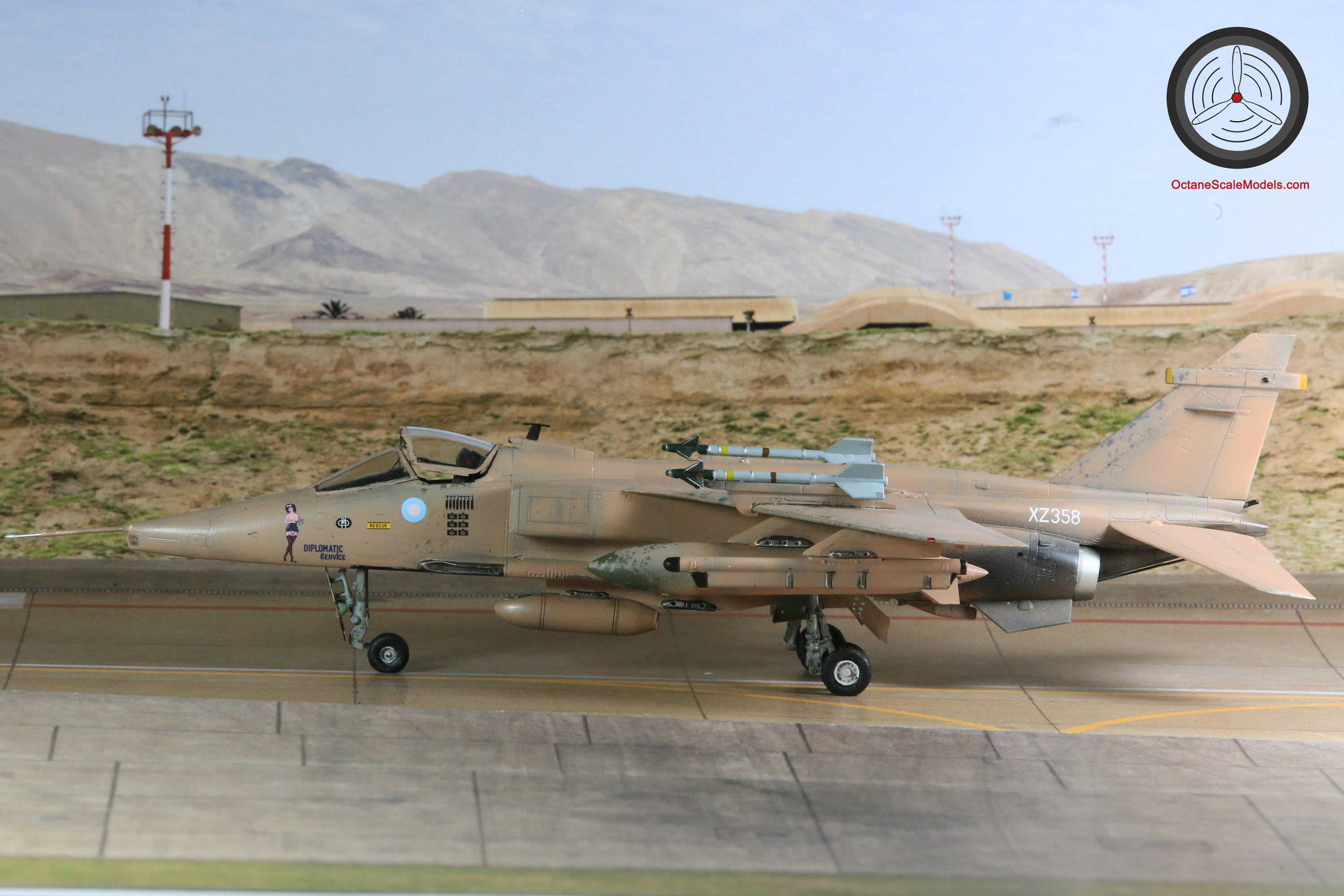 The GR1A Jaguar operations as part of Operation Granby have been well covered in the past I would have thought so this is limited to just the specifics for this aircraft and equipment load.

In 1990 it received the “standard” Gulf War modifications (GPS navigation and other tweaks) and was deployed to Thumrait, Oman on 23 Oct 1990 where it carried the nose art ‘Diplomatic Service’ and was coded ‘W’ as modelled, these Jaguars later moved to Muharraq in Saudia Arabia

It returned to the UK on 13 Mar 1991, but only briefly as It was then deployed to Incirlik in Turkey on 04 Sep the same year as part of Operation ‘Warden’ policing the No-fly zone in Northern Iraq.

It was withdrawn from use whilst based at RAF Coltishall in July 1996. In October 1996 it was dispatched to the Aircraft Maintenance Instruction Flight at Cranwell as 9262M and from there onto DSAE Cosford where I assume it still remains.

The Aircraft I have modelled, XZ358, is configured in a recon role with a LOROP (Long Range Oblique Photography ) pod on the centerline, this was rushed into service for the start of Operation Granby, as an alternative to the older BAC pod that was still in service. The other pylons hold 2 fuel tanks, a pair of AIM-9L Sidewinders and the AN/ALQ101 jamming pod (port) and Phimat chaff dispenser (starboard)

The camera systems in both pods were still of the Wet Film variety during 1990, the LOROP or “lightweight” pod was later upgraded through its life with various Vinten cameras depending on the mission requirements – it was then referred to as the JRP or Jaguar Reconnaissance Pod then the Joint Reconnaissance Pod (why waste a perfectly good abbreviation), upgrading to digital later on along with another name change to the Digital Joint Reconnaissance Pod (DJRP), when it was also fitted to Harriers and Tornados. The Tornado also got its own dedicated RAPTOR pod in time for Operation Herrick.

This build was based on the 1:72 Hasegawa kit which actually dates back to 1984!! Even with the date of the kit this is a superb build and of the 1:72 Jaguar kits on the market this is still the best out there. It does have a few issues though, the overwing pylons are modelled on the French version and are a different design to the ones the British aircraft carried, the airbrakes have bumps all over them which are meant to represent holes on the actual aircraft,,,, I borrowed a set of over wing rails from a Tamiya kit (it’s the same model as the Italeri kit – but cheaper), and I was also planning to use the BAC recon pod that this comes with. Luckily Daz found an aftermarket set at the local model shop that has the newer LOROP pod so as this was rushed into service for Operaton Granby I rushed it into service on my build along with the photo etch.. A resin seat from Pavla finished off the cockpit.

The model builds incredibly well with only minimal filler and sanding required. To replicate the wear and tear shown by aircraft in theatre in the Gulf I painted the leading edges and front of the tanks in the grey/green camo livery normally work by the Jaguar fleet at that time, and then salt chipped it with an overlaying coat of FS30279 (Desert Sand) which was the ATRF overspray colour used by the RAF in their rushed preparations for theatre, all main colours are Hataka Acrylic. The decals came from a ModelWorld sheet.

One benefit to building a Gulf War aircraft is the near complete lack of stencils. XZ358, had the remains of 2 “rescue” marks on the cockpit sides and that is it, even the ejector seat triangles have been oversprayed

If you are looking for a good build of this iconic aircraft then I’d recommend the Hasegawa one for sure.