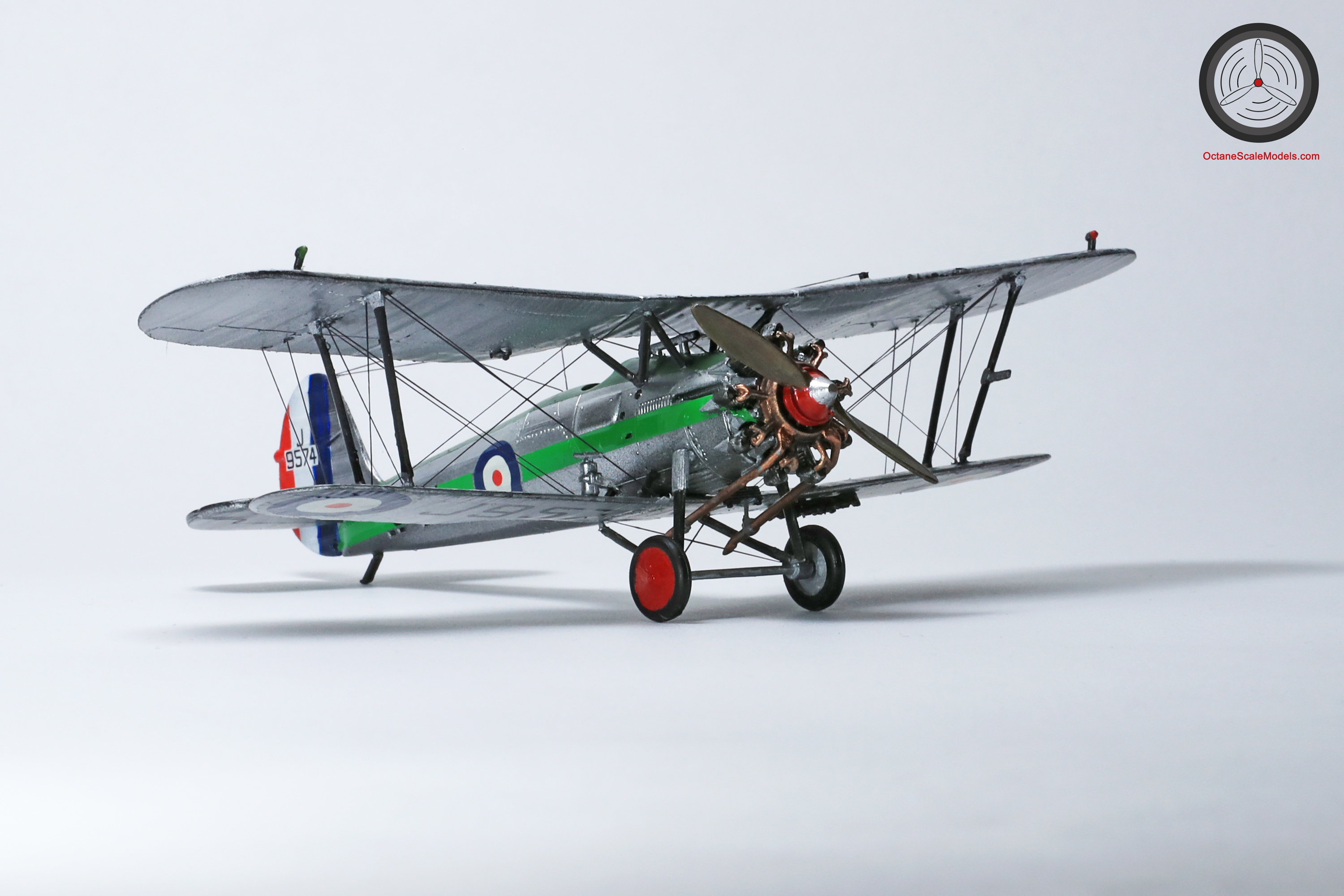 The Bulldog I 1st flew on 17th May 1927 (known at the time as the Bristol Type 105), in a private response to an Air Ministry call (F.9/26) for a new day/night fighter. It was powered by Bristol’s own 440hp Jupiter engine (their more powerful Mercury power plant was available but was expected to be in short supply).

As it was designed to replace the last of the WWI era designed airframes this was an all-metal construction but still with fabric covered wings, empennage and rear fuselage.

In early trials against the Hawker Hawfinch its handling and maneuverability were praised but it’s spin recovery characteristics were felt to need attention. The revised design (now known as the type 105A or Bulldog II with a lengthened rear fuselage) rolled out on 21st January 1928 and continued its trials against the Hawfinch. The performance was so similar now that the 2 types were handed over to operational RAF pilots for their final verdict – the Bulldog II prevailed only because it was considered a little easier to maintain in the field.

The first operational Bulldog II was delivered to RAF squadrons on 8th May 1929 and the 25th delivered on 10th October the same year. J9574 (the subject of the model) was the 7th airframe of the first production batch off the main production line. In total Bristol produced 92 Bulldog II aircraft and 268 of the later IIA version (revised wing sweep and tail, along with wheel brakes amongst a host of smaller modifications).

Although built as the new front line fighter for the RAF, the Bulldog never saw combat with them, although they were deployed as a contingency to Abyssinia (Ethiopia) in 1935/6 after Mussolini moved 2 divisions of troops into the neighboring Eritrea and French Somaliland.

That isn’t to say that the Bulldog remained un-blooded – The Finnish Air Force (who had 17) used them in the Winter War of 1939 with the Soviet Union, shooting down 6 aircraft for a loss of only 1 of their Bulldogs. In 1936 Latvia sold on 11 of their aircraft as part of their modernisation programme to the Basque nationalist forces in Spain where they became part of the Spanish Nationalist Forces during the Spanish Civil War until retirement after the Battle of Santander in the summer of 1937.

RAF Fighter Command withdrew their own Bulldogs in July 1937 but some flew on for a few years with Service Flying Schools.

The other “Claim to Fame” of the Bulldog was that it was the type that Douglas Bader was flying when he crashed performing unauthorised aerobatics, loosing both his legs.

It is unknown what happened to J9574 but it was likely broken for scrap on fleet retirement.

The Gloster Gauntlet was the normal line replacement for the Bulldog but 3 Sqn started receiving the Gloster Gladiator I to replace theirs from March 1937.

As an aside, 3 Sqn are still an operational fighter squadron (the oldest heavier than air squadron in the RAF) and currently fly the Eurofighter Typhoon FGR4 based from RAF Coningsby in Lincolnshire.

This was picked up cheap as a purchase of 3 of them from KingKits, the boxing this one came in dates from 1987-9 (the decals were still very usable) although the Airfix kit first dates as a new release from 1969 with no modifications apart from decals options since then.

The fit was surprising good (seeing as the tooling was between 18 and 20 years old when it was moulded.

The initial Airfix kits (up to 1978) come with 19 Sqn markings, which were replaced with 17 Sqn markings from 1987 until 1992 when they were replaced again with Swedish Air Force and RAF 56 Sqn markings. The kit was discontinued in 1996 although can be found at toy fairs etc. for around £3! (mid 2016 prices)

The rigging was my first attempt at fully rigging a biplane and after a couple of experiments (and an extended shelving) this was finally done with EZline – a very thin elastic thread which makes rigging (if not a joy), then the work of an evening for this sized kit.

The paint is Vallejo Metal and was, I think, my first attempt at using it – I’ve changed the way I use if now and it generally comes up with smoother result now (mostly). The shiny forward fuselage section is still in Klear but the remainder is Vallejo satin varnish to simulate silver dope.

The 3 Sqn markings come from the Model Alliance Sheet “Wings of Silver Pt.1” and applied very well, the original Airfix decals (I re-used the roundels) also applied with no great issues and settled well with micro sol/set.

If the vertical bars on the tail look a little odd, it is because that at the time they weren’t a statutory part of the RAF nationality markings, and 3 Sqn decided to paint them on with the blue to the front (in the same way they had used in WWI) whereas later on (up to the modern day) the red appears at the leading edge.

A nice little kit to build – definitely a product of its age though (the cockpit interior consists of a seat – that’s it), and something different in the line up. I’m glad the EZline went on well – I’ve got a load more aircraft that need rigging in the stash to come….