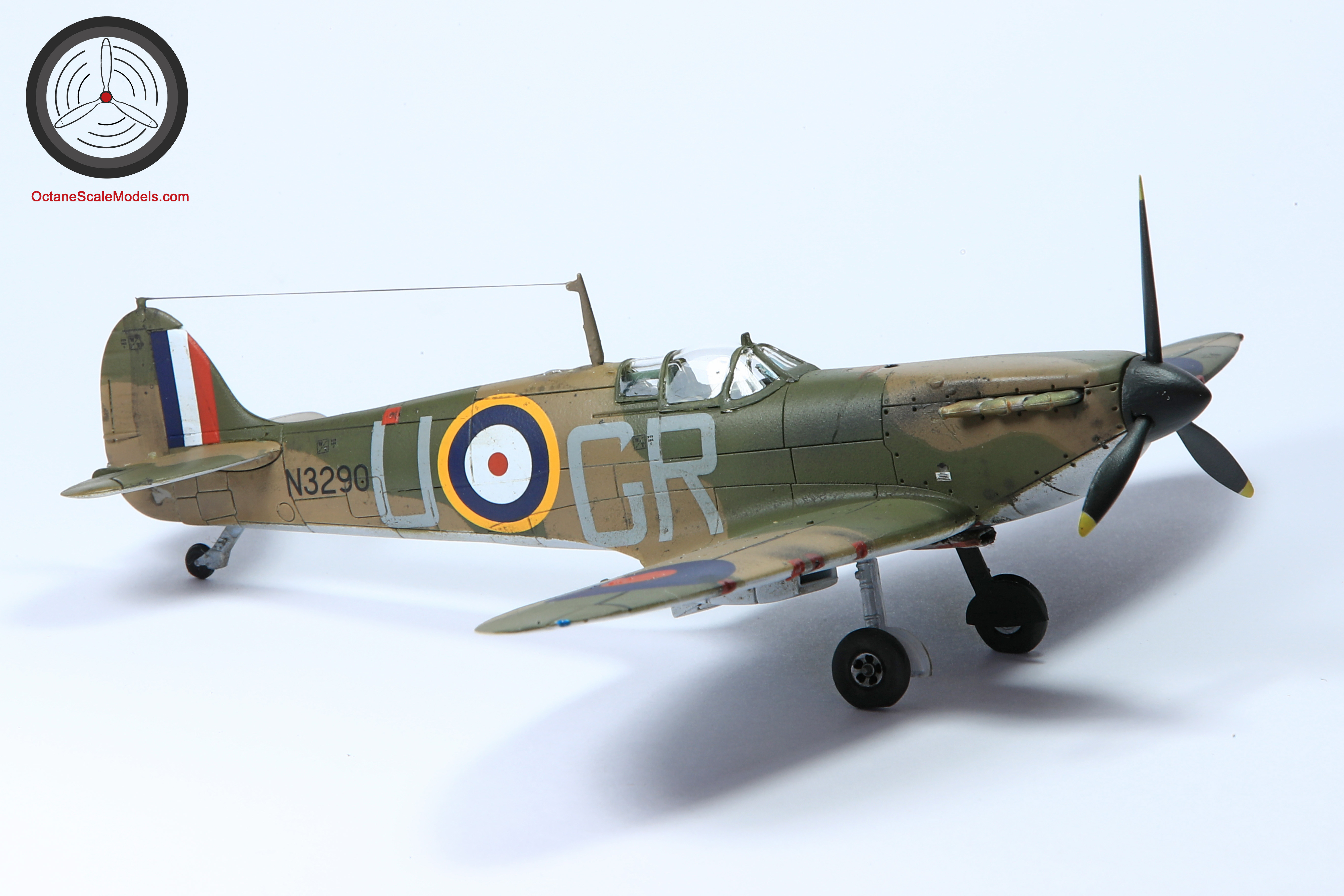 N3290 was delivered from the Eastleigh Supermarine factory on 16 Jan 1940 and after 5 weeks at the 27MU was delivered to 92 Sqn at RAF Hornchurch on 20 March.

On Thursday 23 May the Squadron was tasked with its first combat mission of the Battle of France and was to sortie across the English Channel to “patrol Calais, Boulogne and Dunkirk”; The 1st sweep utilising 12 aircraft took place from 10:45hrs to 12:45hrs with the loss of one aircraft (P/O Learmond flying P9370), a 2nd sweep of 12 aircraft took off at 17:20hrs to repeat the mission. On this 2nd sweep F/O John Gillies was allocated N3290 (GR-U) which was both his and the aircraft’s 1st combat mission as neither had been assigned to the 1st sweep that morning.

During this 2nd mission the squadron encountered a flight of He111s heavily defended by Bf110s of II and VI/ZG76 and Bf109s (unknown unit); South African Sqn Ldr Roger Bushell ordered an attack on the formation and in the following combat John Gilles’ aircraft was badly damaged and was forced to make a belly landing in a field near the village of St.Martin Les Boulogne were it came to a rest on a railway track. John Gillies survived the emergency landing unharmed but was captured and spent the rest of the war in captivity in Stalag Luft Sagan and Beleria.

The other 2 aircraft in Sqn Ldr Bushell’s flight of 3 did not fair well either… Roger Bushell’s own aircraft (N3194 GR-Z) was also so badly damaged that it was forced to make an emergency landing, Sqn Ldr Bushell was also captured. He rose to “fame” as the head of the Escape Committee in Stalag Luft III (immortalised by Richard Attenborough in the movie “The Great Escape” as Big X [Name changed to Bartlett]), he was captured after the escape and was executed by the Gestapo on 27 March 1944 3 days after escape (49 other escaped prisoners were also executed). He is buried in Poznan Old Garrison cemetery, Poland.

The 3rd aircraft of the flight (P9373 GR-H) was flown by Sgt.Paul Klipsch; sadly Sgt Klipsch was killed in the attack – He is buried in Wierre-Effroy near where his aircraft crashed. In 1999 the Time Team British TV archaeology programme excavated the remains of his aircraft (aired 16 January 2000) and in the process came across further remains of Paul Klipsch, these were immediately interred in his existing grave in the local cemetery.

Of the remaining 9 aircraft on the sweep, F/O Green returned wounded and was hospitalised. In total, of the aircraft that returned 7 were so badly shot up that they were declared un-serviceable. 92 Sqn claimed 23 victories of its own that day.

Airfix’ 1:72 Spitfire Mk.Ia needs very little in the way of introduction – it was 1st introduced as a new tooled model in 2010 and has since appeared in several boxings with parts covering early and late Mk.I, Mk.II and MkVa versions.

This edition is the latest new reboxing (A01071B) from Airfix and has been built straight out of the box with the supplied decals for GR-U (with only an antenna wire being added made from Easy-Line).

With a little care the kit still builds very well, watch the alignment of the cockpit interior though as any mistake here will stop the fuselage halves closing properly – I normally shorten the “floor” section by a mm or so between the instrument panel and seat bulkhead to make the alignment easier. Some criticism has been levelled at the lack of dihedral on the model – this is easily remedied as it is caused by the wing root section of the fuselage being fractionally too wide and this pushes the wings flat; a little work with a sanding stick lets the wings sit at their natural angle.

For paint I used Hataka’s Orange line Lacquer range with Dark Earth and Dark Green top sides and black, white and silver undersides. As the aircraft was only 2 months old when it was lost I kept the weathering to a minimum with only light cordite stains around the gun muzzles and light exhaust stains. The underside was a bit more heavily stained with the gun ejection ports and engine oil leaks getting more attention (the rule of thumb with WWII Merlin engines seems to be “if it isn’t leaking oil – worry”