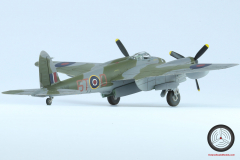 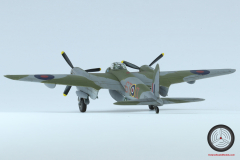 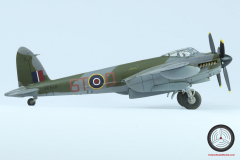 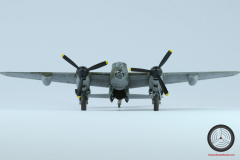 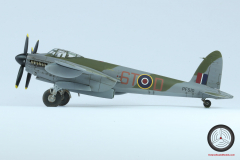 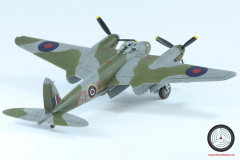 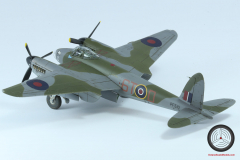 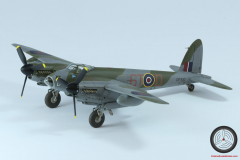 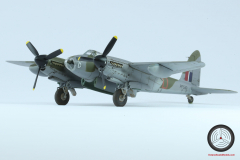 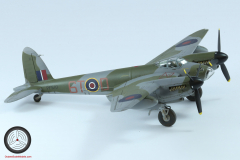 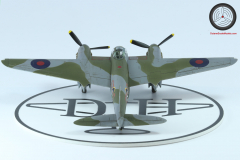 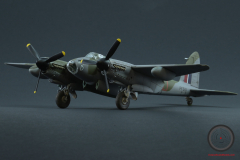 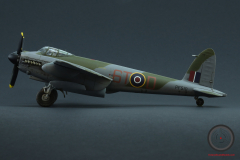 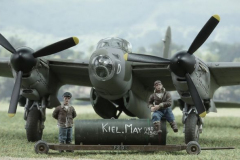 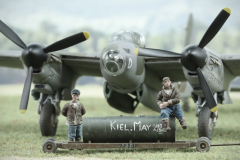 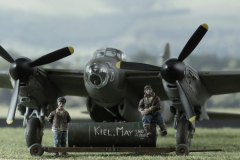 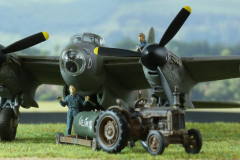 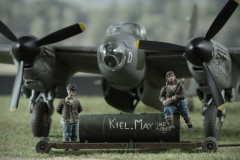 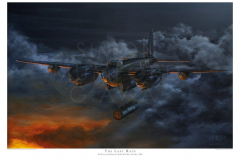 On 2nd May 1945, 16 Mosquitos from 608 Sqn from 8 Gp took part in what was to be the last Bomber Command raid over Germany of WWII; the target was Kiel and a build up of troops and equipment that intelligence believed were shortly to be shipped to Norway to continue the war. Also taking part were 128, 139, 142, 162, 163 & 692 Sqns with support from the Fortresses and Liberators of 100Gp which would disrupt the air defences with Window drops.
The 608 Sqn raid took off in 2 waves, the first wave started departing RAF Downham Market at 21:32hrs and the 2nd wave followed at 22:38hrs. The first wave of 8 Mosquitos dropped their 4000lb “Cookie” bombs in a coordinated strike between 23:31 and 23:32 (one bomb hung up though), the 2nd wave between 00:21 and 00:34; the final release came from the CO’s aircraft (D-Dog) crewed by W.Cdr. Ken Gray and his Norwegian navigator Capt. Halfdan Mehre. They landed back at RAF Downham Market at 02:18, there were no losses.
Although this was the last Bomber Command raid and these are recorded as the last bomb drops, 109 Sqn have 2 bomb releases at 00:54 the same night over the nearby Eggebeck airfield recorded in their ORB of that night.
There has been a well publicised photo showing 6T-V with the Cookie marked as the one I have painted on trolly F2D1, I’m sure I’ve seen this bomb parked in front of some other 608 Sqn aircraft so possibly it was used for a photo shoot for all the crew, anyway – I’ve assigned it to the CO’s aircraft

The marking on the trolly “F2D1” means it was borrowed from 635 Sqn (also based at RAF Downham Market) where is was last used as trolly 1 on Lancaster F2-D.
PF510 was built as part of a batch of 195 Mosquito B.XVIs by Percival Aircraft of Luton (PF379-PF619), these aircraft are known to have been painted with a much lower demarkation line between the Dark Green/Ocean Grey topsides are the Medium Sea Grey lower surfaces than other other factories applied. It was initially delivered to 128 Sqn but I can find no record of operational flights for this airframe so I would guess it was an “operational spare”, the only flight that it appears in the 608 Sqn records is this final raid, so I’d guess it was selected as the CO’s own aircraft being on very low flying hours.
The kit is the new tooling Airfix 1:72 Mosquito and aside from a couple of errors on the bulged bomb bay (it seems to have been scanned from a post-war TT35) which were easy enough to sort out, it’s a lovely kit! The undercarriage is a bit fiddly to align to clamp the wheel in place (even with the provided “jig” used) but does look good

I painted this in my normal Hataka Orange Line lacquers and the Sqn marking came from an old Modeldecal sheet in the decal stash.
The 4000lb Cookie, tractor, trolly etc. came from the Airfix WWII RAF Bomber Re-supply set.
Simon Mumford has produced a lovely print of a 608 Sqn Mosquito over Kiel on this last raid. http://simonmumford.co.uk/prints/the-last-raid-print