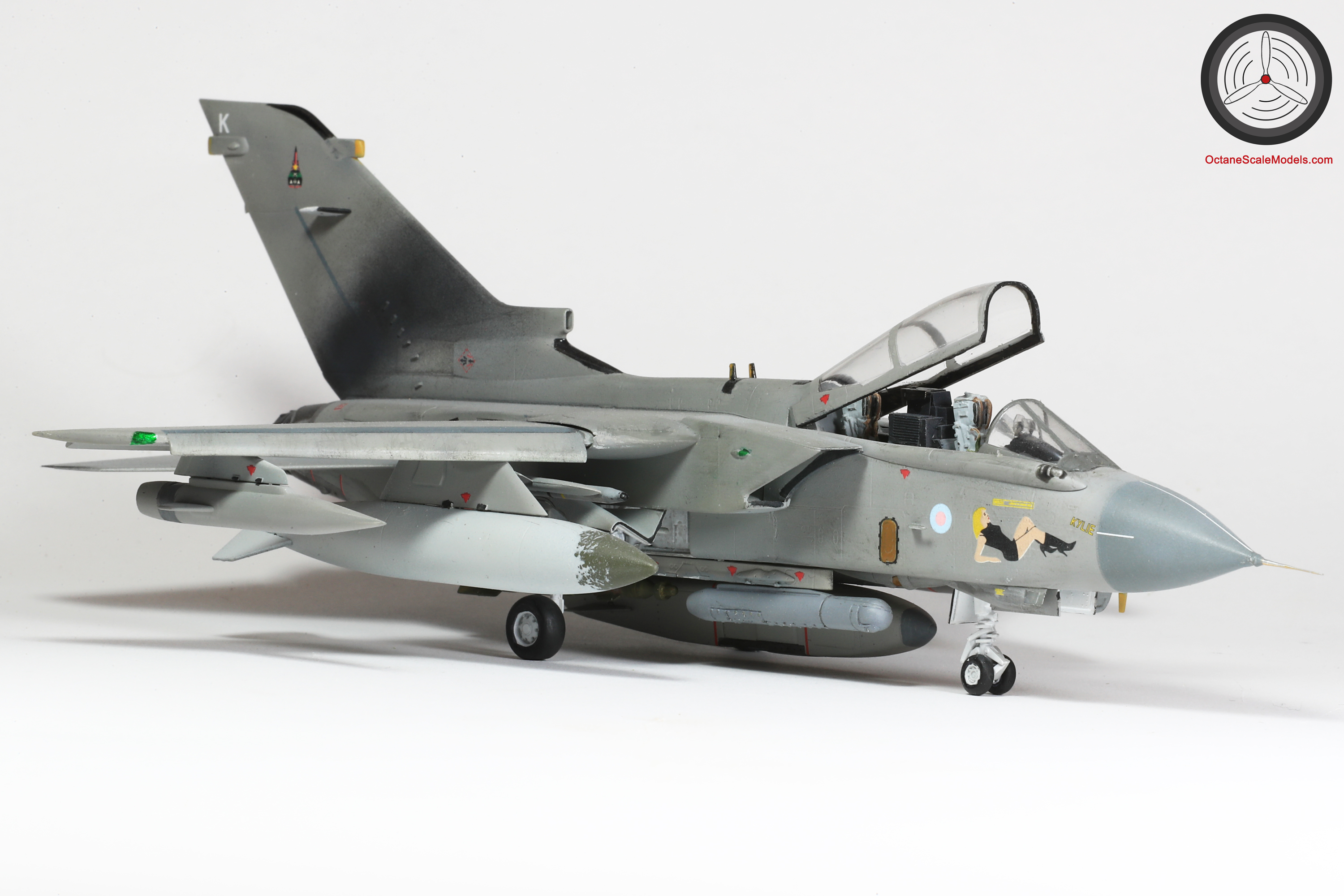 The Tornado GR4A was a development of the recon Tornado GR1A that was upgraded at the same time the in service GR1s were upgraded to the updated GR4 specification between October 1997 and 2003. ZG726 was sent to BAe Warton on 17th June 1998 for this conversion which was completed by 3rd March 1999.

The GR4A initially carried over the same TIRRS (Tornado Infra-Red Reconnaissance System) as the GR1A (the brown rectangular patches below the cockpit) and the IR Linescan system (the bulged pod behind the front undercarriage bay), but due to technological evolution these were soon mothballed (although the external hardware remained in place). On both the GR1A and GR4A this TIRRS replaced the Tornado’s integral cannon.

Operation Telic (otherwise known by the US mission name “Operation Iraqi Freedom” or “Gulf War II”) started in on 19th March 2003 and ultimately concluded on 22nd May 2011 when the majority of British forces were withdrawn from Iraq. Whilst the Americans assign media friendly names the UK mission names are drawn from a random list of words (a Telic is an adjective describing a move towards towards a purposeful end) – although it soon became known within the UK Armed Forces as “Tell Everybody Leave Is Cancelled”.

The nose art on the Telic aircraft was more restrained than that seen during Operation Granby (Gulf War I) as it was thought that the naked lady theme often seen before might cause offence if the aircraft had to divert into the conservative Saudi Arabia. Quite a few aircraft used their tail codes as inspiration for their names and so ZG726 “K” became “Kylie”. The 2 tone grey scheme normally worn by RAF GR Tornados as this time was also replaced with an overspray of Camo (Barley) Grey ATRF (thankfully obliterating many stencils), although this does seem to be a touch darker than the normally applied Barley Grey paint.

The model is portrayed as “K-Kylie” early on in operations before any mission marks were applied to the cockpit side and is carrying RAPTOR and TIALD pods and a Paveway II laser guided bomb in addition to high speed 1500litre tanks and Sky Shadow and BOS pods.

The RAPTOR (Reconnaissance Airborne Pod TORnado) contains dual band 110 inch focal length sensors and a real time air-ground data link. These for the 1st time enabled both daytime and night time recon from medium altitude (rather than daylight only down in the weeds where the GR1As earned their living during Operation Granby). These were phased in only months before the operations in Iraq began and are still in use. Unfortunately due to clearance issues the RAPTOR pod will not fit under a Typhoon (would it then become a RAPTY?) and currently there is no publicised replacement in the wings to take over when the Tornado is retired…

The TIALD (Thermal Imaging Airborne Laser Designator) pod was carried in order to self designate targets for the Paveway II Laser Guided Bomb, these were replaced by the newer LITENING III pod a year or so later which gave much greater resolution, a huge bonus when targeting individual building and vehicles which is more often than not now a mission prerequisite.

ZG726 first flew on 13th November 1990 and was delivered to 13 Sqn as “K” (a GR1A) on 10th December the same year. Until Operation Telic the only notable occurrence was a bird strike on 17th May 1995 (whilst still a GR1A). ZG726 was sent to BAe Warton on 17th June 1998 for upgrade from GR1A to GR4A, returning to 13 Sqn on 3rd March 1999. On deployment to the Middle East it became part of the “Marham Strike Wing” and then on return to UK line duty it seems to have been reassigned to 2 Sqn. Sometime in 2007 the aircraft was re-designated as a standard GR4 which probably means the older recon kit was removed at that point and likely the cannon re-installed. In June 2012 ZG726 was assigned to the RTP (Return To Produce) programme at RAF Leeming and was broken back to spares to help keep the remainder of the fleet airworthy.

Given the price point for these models in the UK I was more than a little disappointed – the tooling dates from 1989 and at the time must have been a jaw dropper, however Revell came out with their GR1 in 1998 and given the fact that it retails for about 50% of the Hasegawa price in the UK the detail is far superior (apart from the nose – which is the wrong shape…) I guess that shows up 9 years of kit evolution. I have sold on the twin piece TTTE anniversary set now and will get a couple of Revells to replace them in the line up.

The kit DID build superbly though (apart from the main gear doors which will not mount at the correct angle and a couple of sink marks and obviously visible injector pin marks which had to be addressed) – it’s just the value for money that I question in the light of alternative sources.