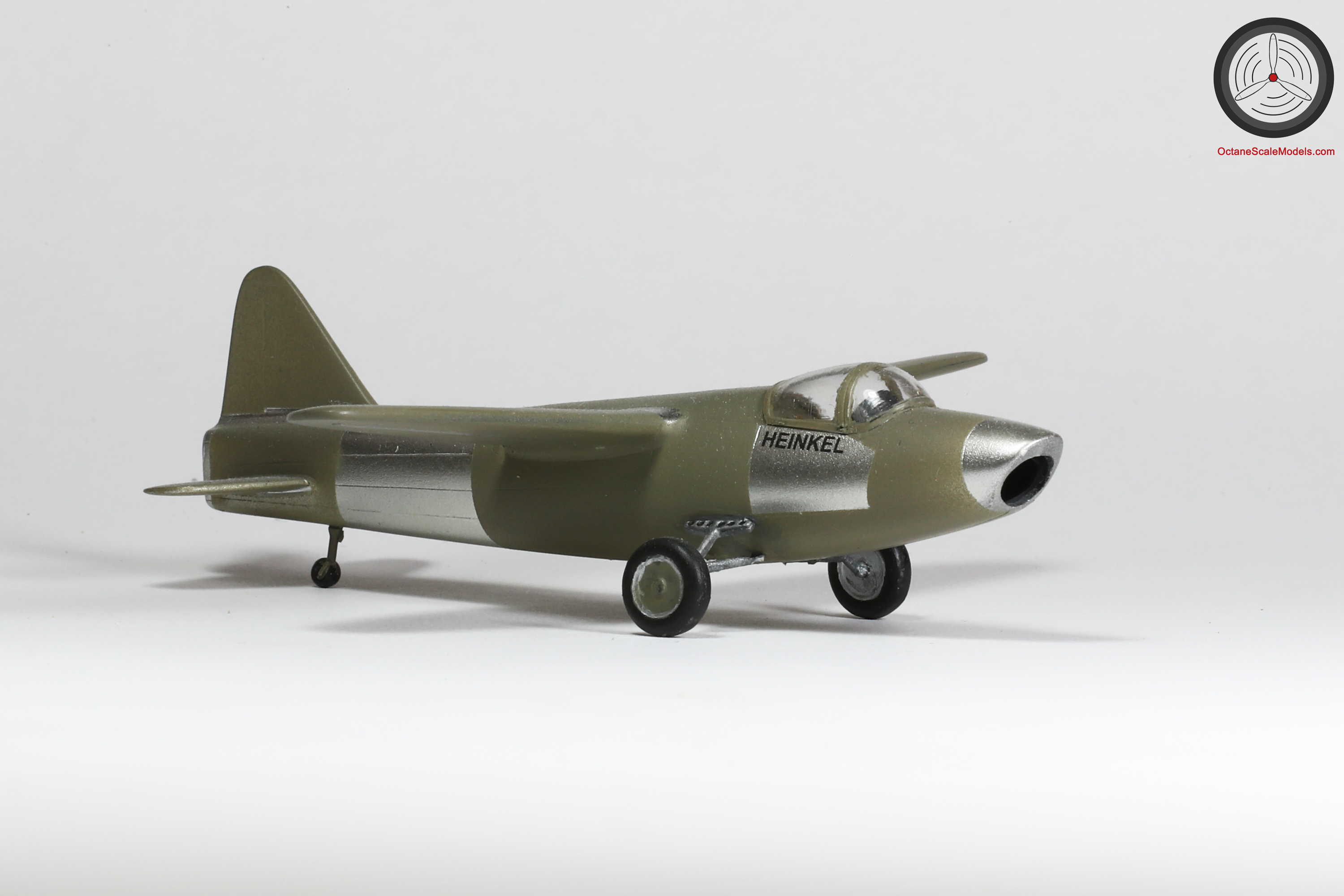 [Not a valid template]The Heinkel He178 V1

The He178 is now recognized as the world’s first functional turbojet powered aircraft. It was developed as a private project without the knowledge of the RLM (Reichsluftfahrtministerium – the Reich Aviation Ministry) by the Heinkel company following up on a patent taken out in 1936 by a young German engineer Hans von Ohain.

The concept hydrogen fuelled centrifugal turbofan engine itself (Heinkel-Strahltriebwerk 1 [HeS 1]) was built between the summer of 1936 and March 1937 with the first powered run in August of the same year.

The follow up flight quality version of the engine (HeS 3) was developed from this but fuelled now by the much more available diesel. The HeS 3b (the 3a version having under-delivered on power) was test run under the belly of an He118 dive bomber prototype, but take offs were scheduled to be under prop power only and to take place before the workforce had arrived for the day – such was the secrecy demanded.

The first HeS 3b engine burnt out it’s turbine and a second one was commissioned which was then immediately fitted to the now compete He178 V-1 airframe ready for test flights. The pilot to undertake the test flying was Heinkel’s test pilot Erich Warsitz who had only just recently flown Heinkel’s (and the world’s) first rocket powered aircraft the He176 in June 1939.

On the 24th August 1939 the He178 achieved a short hop during high speed taxi trials at the Heinkel factory and test airfield at Rostock-Marienehe on the Baltic coast of Germany and conducted it’s first full flight on 27th August (the date taken as the first jet flight). All did not go smoothly however as the aircraft suffered a bird strike (sucking the creature into the engine and causing a flame out) after attaining a maximum speed of 372mph (being limited by the fixed undercarriage); these test flights were carried privately and as stated before under great secrecy (even from the RLM). Engineering calculations concluded that with retractable undercarriage a top speed of 435mph was possible and with development 530mph was within reach.

Within a week of these first test flights on 1st September 1939 Germany invaded Poland initiating WWII and RLM instructed aircraft manufacturers to scale back development and experimental work and concentrate on production of the machinery necessary to win the expected short war to come, the exception was single seat jet fighters which should be given a high priority.

To this end Ernst Heinkel managed to arrange a flight demonstration of the He178 (and also a ground inspection of the new He177 bomber) to RLM and other notables on 1st November 1939 after the Polish campaign had been concluded. The heads of RLM, Ernst Udet and Ernhard Milch along with engineer Helmut Schlep attended the demonstration, but Herman Goering who was also expected failed to show up. Udet and Mauch were said to be “unimpressed” with the aircraft’s performance and the programme received no backing from RLM. Privately it has been said that Mauch later confided in the engine’s designer Ohain that they had indeed been impressed with the engine but were less satisfied with Heinkel’s ability to engineer the test airframes needed to take the engine development project forward.

What Ernst Heinkel did not realise was that after he had proved the concept that a turbo jet could work RLM decided to develop its own jet engines but on the axial flow principle (an undeveloped patent put forward in 1921 by a French engineer called Guillaume) with the BMW 003 engine and the Jumo (Junkers) 004 engine.

The BMW engine went on to power some versions of the Arado Ar234 Blitz and ironically Heinkel’s own He162 Salamander. The Jumo 004 however gained fame as the engine that ultimately powered the Me262 and also some AR234s

Several flaws became apparent in the aircraft’s design, notably the unsolved issue of its retractable undercarriage (which didn’t), the fact the engine was buried within the fuselage making adjustments and servicing awkward and the long trunking leading to the front of the engine from the nose intake which limited the airflow able to reach the compressor. It should be noted that the vast majority of jet aircraft after this had pod mounted engines with short intakes.

A further aircraft (He178 V-2) was built to address handling and drag issues but never flew under power, only glide tests. The project was abandoned soon after and whilst private work continued on the engine (the HeS 6 being flown under an He111 in late 1939).

Ernst Heinkel was undeterred though and after the abandonment of the He178 started privately funded work on a twin jet engine fighter (the He280) incorporating his lessons learnt from the 178 program.

Conflicting interests between the follow on radial flow HeS 8 series of engines and the also in development axial flow HeS 30 led to development delays and these projects were ultimately abandoned in 1942 when the company was ordered to move onto the larger HeS 11 engine which combined radial and axial flow components.

The HeS 11 was intended to power most of the jet designs in the later stages of the war but only 19 prototypes were completed before the end of hostilities. One of these prototypes mounted in the experimental Messerschmitt 1101 was taken to the USA after the war where it formed the basis of the Bell X5 swing wing experimental aircraft. 2 of these engines are preserved in the USA.

The original He178 airframe was put on display in the Berlin Air Museum but was destroyed in an Allied bombing raid in 1943.

A full sized replica He178 V1 now hangs from the ceiling of Rostock-Laage airport (where it did its only flights) arrivals hall, sadly this is the only airframe existing of this ground breaking aircraft.

If RLM had decided to back the proven but less efficient HeS engine rather than start from scratch with its own BMW and Jumo engines it is more than likely that a German equivalent of the Gloster Meteor (also radial turbine powered) could have entered squadron service well in advance of anything the Allies could have fielded.

The first British jet, the Gloster E28/39, first flew on 15th May 1941 at RAF Cranwell some 22 months after the equivalent German flight. Despite this advantage, the Germans squandered the lead they had in race to the first operational jet fighter and the Me262 and Meteor entered service within a month of each other in mid-1944.

Theoretically, if the funding and development time taken by the British and the Germans to get to the operational fighter stage had been applied to the Heinkel engines rather than the BMW and Jumo units then the world could have seen the first jet fighter squadrons online by August 1942 (1 month after the first USAAF operation in Europe, The German invasion of Russia and Rommel attacks El Alamein).

Special Hobbies have recreated both versions of the He 178 based on the MPM offering from 1994 but with p/e added.

The fit of the body and wings etc. is pretty good given it’s short production run pedigree – the canopy is very much a fit where it touches though.

References are pretty scarce (only a handful of grainy black and white photos exist that I have found), the original aircraft was reduced to ashes over 70 years ago and most of Heinkel’s records went the same way 🙁

The model is finished in Valejjo RLM02 (the standard RLM equivalent of “interior green”) and their “pale burt metal” from their new Metal Colour range.