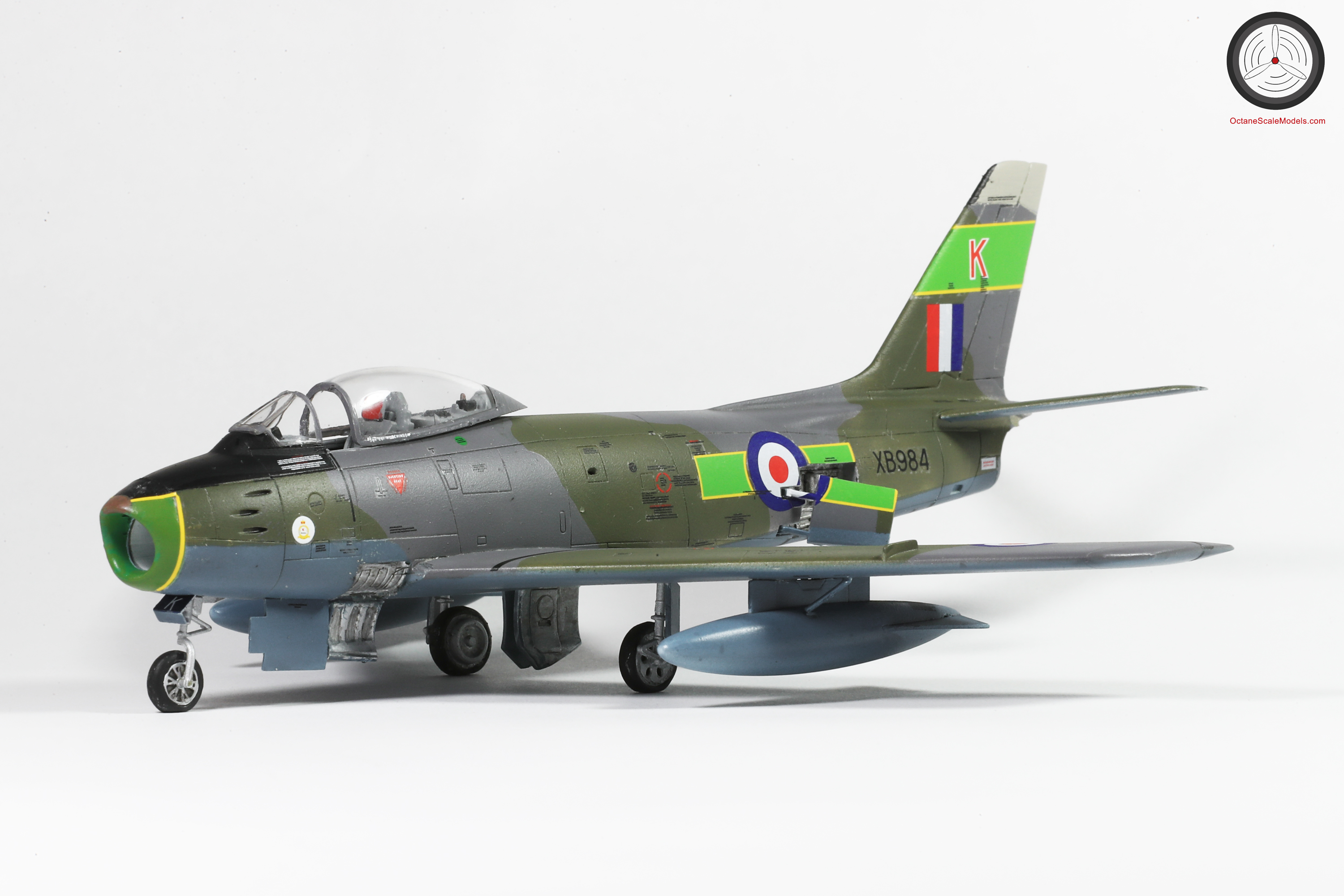 In the late 1940s/early 50s the RAF were looking for an interceptor to replace the becoming rapidly obsolescent Vampire; 2 programmes were initiated which were to culminate in the Supermarine Swift and the Hawker Hunter.

There had long been concerns about the Swift’s performance and handling (which were indeed born out, as after a lengthy development only the recon version ever made it to squadron level for any significant time and then only because as a recon aircraft it wasn’t intended to fly at high altitude where it’s afterburner still could not be lit) and the Hunter’s development was scheduled to run for a few more years.

A decision was therefor taken to purchase 428 CF-86 Sabre F4s (a Canadair licensed built version of the North American F-86E), all were handed over to the RAF re-equipping 11 squadrons in fairly short order starting in late 1953.

1st Flown on 13th October 1953 as XD123 (serial 19875) the aircraft was re-serialed to XB984 and was delivered to the RAF on 10th November 1953 when it was sent onto 3 Sqn at RAF Geilenkirchen in Germany. During its life with the Sqn it was fitted with the later specification 6-3 wing (which did away with the full length leading edge slat of the earlier design) and became the personal aircraft of Sqd.Ldr.Hutchinson.

Like all RAF Sabres it had a very short service life as they were replaced with the long awaited Hawker Hunter. The aircraft was transferred back to the USAF registry (who had helped fund the deal) on 8th November 1957, only 4 years after it was delivered. The USAF then sold it onto the Italian Air Force as an F-86E(M) and then later again to Yugoslavia under the serial number 11-119. It is unknown when it was retired or scraped but there is no record of it surviving in any museum or storage now.

This was one of the newly revamped Airfix new tools back in 2010 and was issued in 2 versions, A03082 (USAF and Italian Air Force decals – The Italian one carrying bombs as well as wing tanks) and A03083 (RAF and Yugoslav decals), apart from the decals the kits are identical (it should be noted that the majority of CF-86s in RAF service had an earlier wing design, this kit IS correct for some RAF aircraft but not all that many and only later on their service life). 2 later issues have also been released, the 1st in 2011 as part of an Airfix Club edition (A82011 – USAF Korean War “Little Rita” twin boxed with a MiG15) and in 2014 (A03082A) which again was the same kit but with decal options for John Glen’s Korean War aircraft “MiG Mad Marine” and the Yugoslav aerobatic team. None of these now appear in the Airfix current product listing.

I must say I had no issues whatsoever with the build of the kit, the fit was extremely good and there was no flash at all to contend with, the cockpit is a little basic though (being flat surfaces that have decals applied) and if you are going to build this with no pilot figure then the seat (although basically good in outline) could do with detailing or replacing with a resin one (mine is just white glued in at the moment and will be replaced in a couple of weeks). The canopy is designed to slide but to be honest I don’t know of many people that will want to move it once done – just glue it in place where you want it is my recommendation.

There is a small piece of plastic that forms the upper side of the intake that had “3 grams” engraved onto it. I’m not sure if this indicates that 3 grams extra is required or if this weighs 3 grams – I made sure and packed a load of ball bearings behind the cockpit along with a 5g wheel weight, it is now a firm nose sitting model

If you want a representation of this short-lived but very striking RAF aircraft that I can heartily recommend this one. They are still fairly easy to find for around £10. I have another 2 to build as well

This has been painted using Hataka acrylics, a brand I am growing to like more each time I use them – they are very thin though and need a few light mist coats to build up a good base colour but they give some outstanding results. This model used PR Blue, Dark Green (BS) and Dark Sea Grey (BS), I’m pretty happy with the look and colours