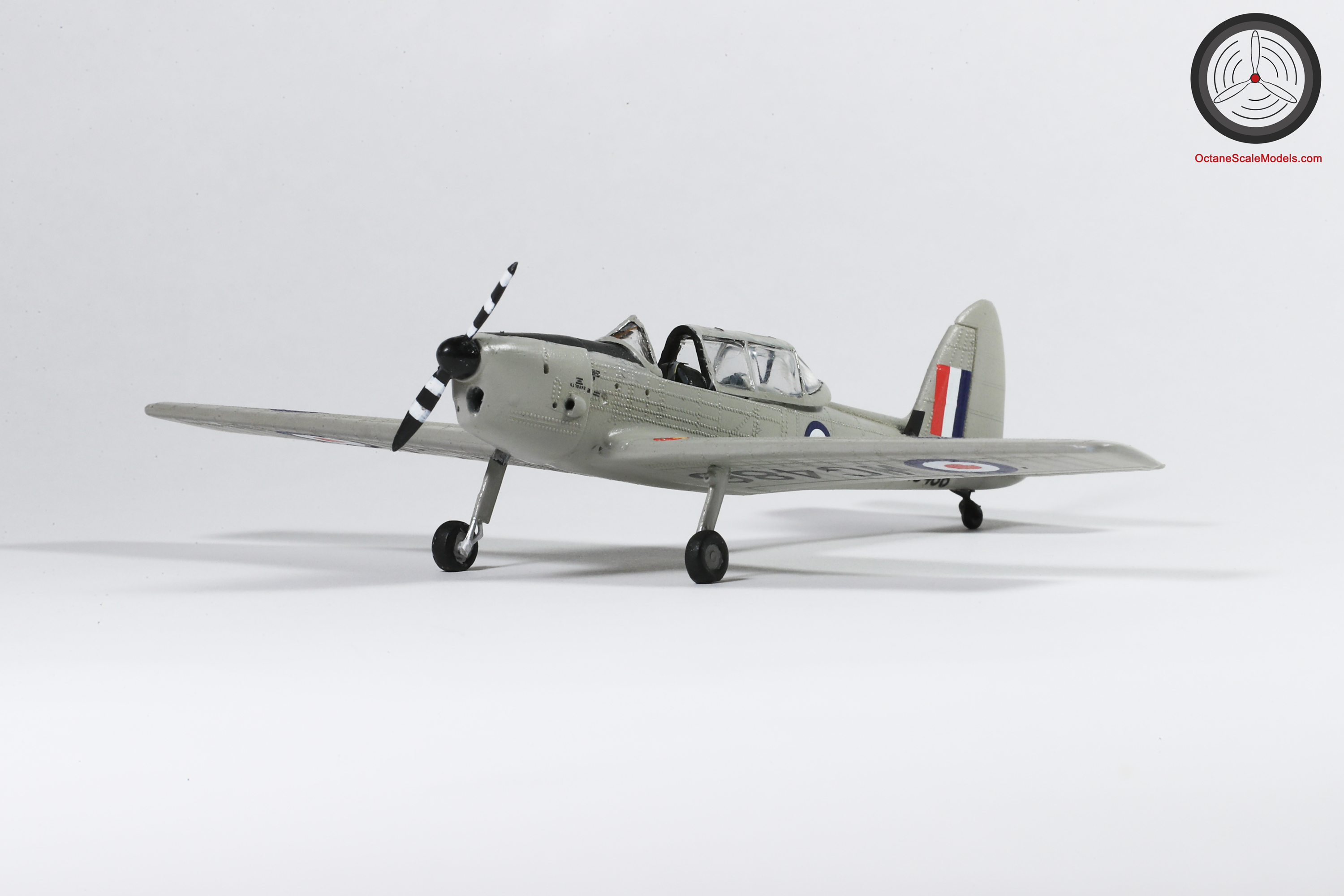 The De Havilland Canada DHC.1 Chipmunk (or Chippy as it commonly known) 1st flew on 22nd May 1946 and entered service with the RAF in November 1949 and by the end of October 1953 740 had entered RAF service as basic training aircraft.

In December 1958, the aircraft was then issued to 114 Squadron in Cyprus, where it was used in operations against the EOKA terrorists, flying low-level reconnaissance patrols and convoy escort missions from Famagusta, Xeros and Akrotiri airfields, with British Army officers in the rear seat. The crisis ended in March 1959 and WG486 was brought back to the UK in 1961.

After this the aircraft spent 16 further years being used to teach new pilots how to fly with RAF College at Cranwell, Initial Training School at South Cerney, No 1 Flying Training School, Liverpool and Bristol University Air Squadrons and finally No 3 Air Experience Flight up until 1987.

After such a long (35 years) and varied career you might think that the aircraft was due to retirement/scrapping but the most interesting phase of it life was about to begin!

In 1987 WG486 was transferred to RAF Gatow in Berlin ostensibly for crew continuation training (letting flight rated officers keep their hours in) but it’s actual tasking was a lot more covert. It became one in the last pair of Chipmunks that had been deployed there (4 pairs in total) since the BRIXMIS (British Commanders’-in-Chief Mission to the Soviet Forces in Germany) programme was started. The programme was designed to allow liaison between Allied and Soviet forces to keep an eye on each others operations to try to deescalate some of the tensions that had arisen since the Berlin blockade and the airlift of 1948/49.

In reality the programme was used to spy on Soviet and East German military installations. The Chipmunks would be crewed inside a hangar (to prevent any Soviet observers easily identifying the crew) with the pilot sat in rear seat and an observer sat in the front with 2 film cameras. The hangar would then be opened and the aircraft taxied out and flow on route around Berlin and through the 3 permitted corridors. The flights would be operated at around 500ft altitude and the aircraft put into a steep banked turn around any objects of interest seen to allow the front seat observer to take photos with the canopy half open. On landing the aircraft would be pushed into the hangar the doors closed and the crew disembark.

In case of a forced landing there was a weighted bag on board that was meant to be used to jettison the cameras and film in to a handy lake or river, but given the gliding range and duration from the operational altitude the accepted plan was to force land the aircraft, open the fuel cocks and fire a flare into the fuel puddle to erase any evidence of elicit spying.

Even though over the long history of the project there were no aircraft, lost these flights weren’t risk free. There are at least 2 documented cases where a Chipmunk had returned with bullet holes in it from some enthusiastic guards on the ground!

So after the fall of the Berlin wall in November 1989 and the wrapping up of BRIXMIS in 1990 you would have thought that this would be the final end of the line for WG486, (The 2nd Chipmunk on the station flight was retired at this point to the Gatow Museum), but no – after 38 years of operations there was one final chapter!

After spending a year at RAF Laarbruch and a 5 month refurbishment at Duxford it then joined the RAF’s Battle of Britain Memorial Flight to assist in the conversion of current RAF pilots to tail-dragger propeller aircraft and to enable the Flight’s regular pilots to keep their hours in without using the Flight’s main aircraft.

So far WG486 has spent 64 years in service and I know at least one member of this group has flown it!

Airfix 1st released their 1:72 Chipmunk in 1970 (the model actually still bears a 1969 date on the inside of the fuselage!). It has been released in 6 different packets and boxes over the years but is currently out of the published available range. My model was built form the latest boxing which actually depicts WG486, but in it’s current black BBMF livery.

The kit is very much a product of its era with huge raised rivet “detail”. These could do with flatting down a little (or removing all together) But I think it gives a nice retro feel to the build. I opened up the canopy and added some basic interior detail (other than a couple of very basic seats there is none in the kit), the canopy plastic is very thick (but quite soft in the latest boxing at least), so I stuffed it with blutac before cutting it with a razor saw. Luckily there were no huge dramas. I have also added the anti-spin strakes in front of the tail (omitted in the kit) and also added a modern coms antenna (both made from Coke Can of course

The serials were home printed and the basic grey livery decals taken from a Model Alliance sheet. The Chipmunk I was modelling had slightly different cooling holes on the engine covers than the one depicted by the kit so these were opened up with a pin drill and craft knife.

A pretty basic build, the moulds are starting to show their age though and the wing underside and fuselage didn’t line up all that well – time for sanding sticks and filler there.

I finished this one in Xtracrylix Light Aircraft Grey.

If Airfix ever bring out a new tool I’d consider replacing this one, but I am pretty happy with how it has turned out though. I have one more in the stash and intend to put that one into the 1980s red/white/grey livery of 7AEF from RAF Newton, which would have been the 1st aircraft I flew as an Air Cadet