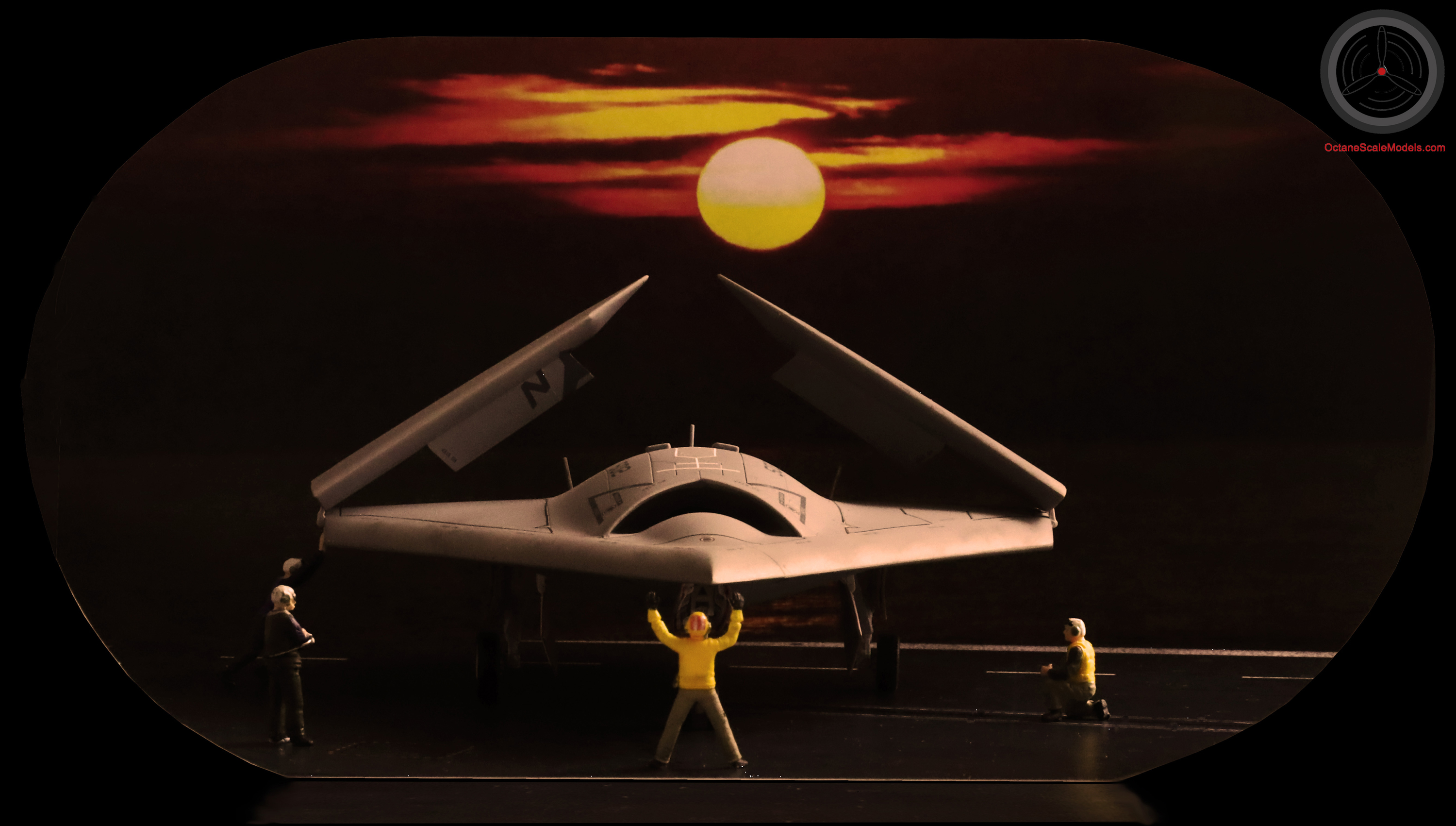 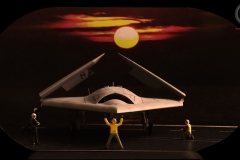 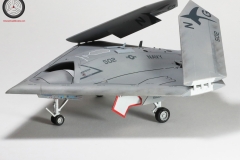 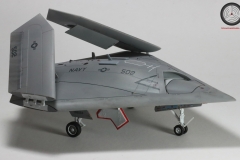 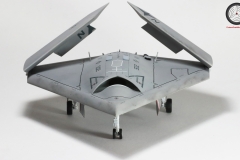 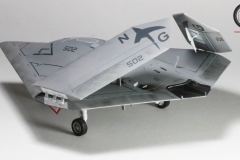 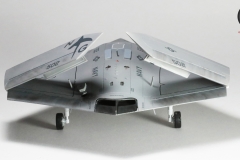 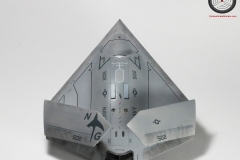 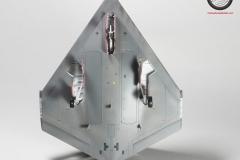 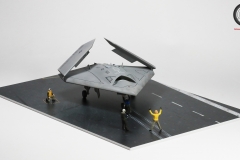 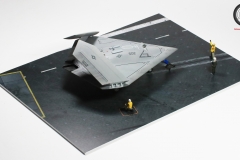 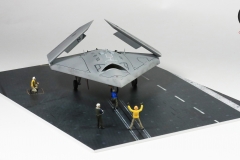 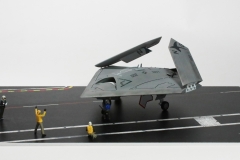 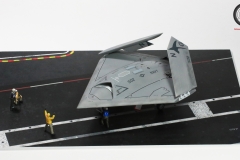 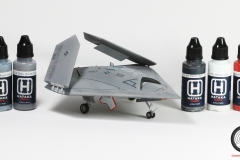 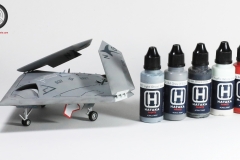 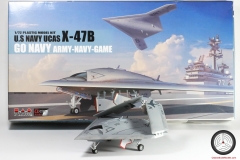 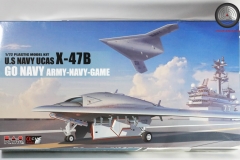 The X-47B is powered by a single Pratt & Whitney F100-220U, (a non-afterburning version of the engine that sits in the back of the F-16 and F-15E); the aircraft fist achieved a powered taxi run in January 2010 and then first flew on 4th February 2011 culminating in flying for the first time with the undercarriage retracted in “cruise configuration” on 30th September the same year.

One of the main objectives of the programme was to develop a UCAS that could successfully operate from a carrier along side an existing wing under normal operating conditions, to this end after a period of ground based catapult launches and arrested landings to check out the systems, the first demonstrator “502” was sent on board the USS George H.W.Bush (CVN-77) for carrier trials between May-July 2013. Further trials were carried out on the USS Harry S.Truman (CVN-75).

A further trial was carried out in November 2013 on board the USS Theodore Roosevelt (CVN-76) to prove it could operate alongside a 70 aircraft air-wing during both day and night operations, along with the heavy EM interference normally found during normal deck operations. This involved a deployed jet blast shield activation on the carrier deck and a twin launch with an F/A18 Hornet from the adjacent catapult.

The X-47B also performed the world’s first autonomous aerial refueling in April 2015 with a fixed probe attached to the starboard wing.

With the flight programme completed, the 2 built X-47B airframes were intended to become museum exhibits – the US Navy however has retained them in flying condition for follow on evaluations.

The follow on developments could go a couple of different ways, under the original UCLASS (Unmanned Carried-Launched Airborne Surveillance and Strike) programme, Northrop are supposed to have developed the RQ-180 (no confirmed images are around yet of it) but a recent shift in Navy thinking now seems to be heading towards a new spin off called CBARS (Carrier Based Aerial-refueling System) for which General Atomics are meant to be developing the MQ-25 Stingray – this will also retain a limited surveillance and data hub/forwarding capability.

The costs? The initial X-47A project was awarded under a $2million exploration contract but the aircraft itself was company funded, the follow on X-47B is estimated to have cost $813million (an over run from the planned $635.8million), the follow on evaluations have a budget of $63 million – grand total $878million.

Technology is advancing at a incredible rate and with machines like this already working and demonstrating themselves capable of normal operations we can surely only be a generation away from fully autonomous combat vehicles and aircraft….

Anyway – this isn’t “Aviation Tech Monthly” – so – on with the model.

The kit is from a lesser known Japanese manufacturer, Platz, and is 1:72. Luckily my wife works in Japan for a week every year and always stops off in the local department store to see what is around that I want… (Handily the model section is right next to where they sell the suitcases too). I have previously had one of Platz 1:72 RQ-4N BAMS (now known as the MQ-4C Triton), so had no hesitation in going for this one, as that was also a superb build – (the Triton by the way is HUGE… think of a drone with the wingspan of a Boeing 737 and you are on the right track!)

Not having a cockpit did simplify the build process somewhat although there are still 58 pieces. The boxing I got comes with “Go!! Navy, Beat Army” decals in addition to the standard flight demo aircraft markings for “501” and “502”; these were apparently carried by an F/A-18 during a recent Army Navy football game??).

2016, #AC-18 Army Navy Game, 2 Demo X-47B airframe markings for the actual carrier trials + “Go!! Navy Beat Army” decals, normal JDAM bombs, but also comes with a new sprue with closed gear doors and weapon bays together with a display base to show the aircraft in flight.

I got the 3rd boxing and decided to build it as the airframe as it first landed on CVN-77.

The kit fit is superb! It is everything we have come to expect from newly tooled kits from Japan, a small skim (and I mean minute) under the nose and along the ends of the inner wing section where they are exposed when building the wings in the folded position is all it needs. The sprue gates are well thought and with care (and a sharp pair of snips) won’t cause damage to the leading and trailing edges. A couple of injector pin marks are visible on the inside of some of gear doors and airbrakes but again a small wipe of filler and a few seconds with a sanding stick takes care of them – as I was building mine with gear down and speed brakes open these had to be dealt with, but if you want to build the X-47B in flight then there are no issues to deal with

The surface detail is finely engraved, and is deep enough that if you want to apply a lot of weathering and panel wash then you have enough depth to play with (as a “demo bird” the majority of photos only show a small amount of leading edge smudges and oil/graphite streaking on the ailerons/flaps along with the usual smudge of soot behind the APU exhaust)

The decals are produced by Cartograph and are definitely up to their usual high standard, very thin with spot on registry between the colours. I did use my usual MicroSol/Set method of applying the decals but to be honest that was probably over kill here as they seem to settle very well on their own.

As I had the third issue of the kit (AC-18) this also came with “Go!! Navy, beat Army” decals that were apparently carried on an F/A18 during a USN/Army football game (?), as I’ve never come across an image of an X-47B with them they went onto the decal bank.

Also not used was the nicely detailed JDAM ordnance, the X-47B hasn’t been involved in weapons trials (or at least nobody has ever talked about it if it has), so they also went into the parts store and the new addition closed bomb bay doors were fitted.

The wings can be posed in either open or folded positions with just alternate joining pieces being the only change you have to select. The wing fold mechanism is shown within the hinged section and shows a reasonable representation of the real aircraft – plenty of scope for additional detail here if you want though. On photos of the aircraft on the carriers with wings folded, the speed brakes seem to hang open under their own weight (being on the underside of the wings when folded), this is a kit option so went onto mine. The instructions also call for the speed brakes to be painted grey on the interior but in flight videos seem to show them as white, I went with white.

The X-47B doesn’t have a wide selection of finishes or schemes available, both airframes are all over FS36270 Grey – the instructions call out for the correct FS number but refer to it as “Neutral Grey”, go for the FS colour match from your preferred paint range and not the name as “Neutral Grey” covers a multitude of sins across several manufacturers. I went for my usual Hataka Red-Line acrylic HTK-A054 FS36270 “Grey” overall with details in HTK-A037 FS36375 “Light Ghost Grey”, HTK-A100 Black, HTK-101 White and HTK-A219 FS11136 “Insignia Red”. With these paints I find a few drops of Vallejo flow improver in each airbrush cup help no end and I usually spray at around 18psi. Note – some references I have found call out for the airframe to be all over FS36375 Light Ghost Grey, but comparison on photos showing an X-47B alongside an F/A18 Hornet seem to show it as a touch darker, which is why I tend agree with the FS36270 call out on the instructions – just my thoughts though.

The display bases are a selection from Coastal Kits and are the CKS620-72 US Carrier Deck-Catapult and CKS110-72 US Carrier Deck. The figures are from an1988/9 boxing of Fujimi’s USN deck crew and are very finely detailed for their age and diminutive size.

The sunset lit photo was shot against a rear illuminated background with a simple card template in front to portray the hangar deck exit and carrier lift of the USS Theodore Roosevelt and it is meant to portray the day/night ops trials in November 2013.

Any criticisms of the kit? This was never going to be a super-challenging build given the tight and accurate fit of the pieces and the lack of cockpit to detail, but I would have liked to see a dropped flap option and an arrestor hook, the flaps are moulded closed and the hook is hidden as it is faired in, nothing too challenging though if you want to go down this route and add your own scratch built additions.

If you are looking for something different in your model collection then this will probably fit the bill nicely, I’m not aware of any UK importers who deal with Platz, but you can buy direct from Platz in Japan from their website.