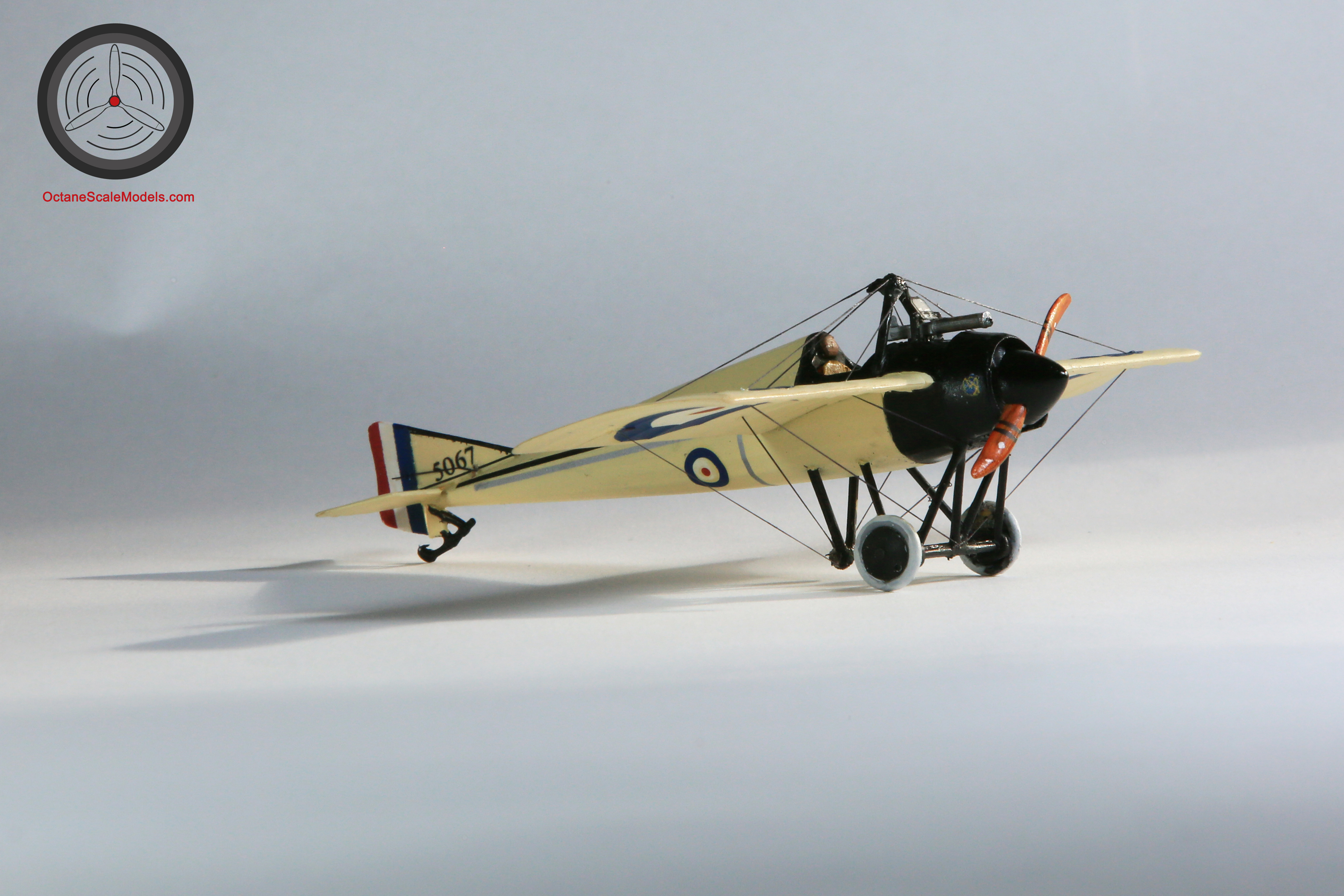 The Morane Saulnier N or “Bullet” as it was nicknamed was a single seat fighter-scout introduced into the Royal Flying Corps in late 1915 after have been introduced to the Aéronautique Militaire in April that year. It was powered by a either an 80hp or 110hp Le Rhone rotary engine giving the streamlined aircraft a top speed of around 90kts and a service ceiling of about 13000ft with an endurance of 90minutes. It was armed with a single unsynchronised forward-firing 7.9 mm Hotchkiss machine gun firing through the propeller arc. As the Allies had yet to develop the machine gun synchronisation linkage the propellers were fitted with deflector plates (invented by the French air ace Roland Garros (he of the tennis tournament fame

😉 ) and previously also fitted to Morane Ls) which simply ricocheted off any bullets which hit the prop. There were no incidents reported of deflected bullets injuring pilots, but the propellers still got damaged by the shock of the bullets impact.

The aircraft proved difficult to fly as it used wing warping rather than ailerons to control roll and this caused it to feel a bit stiff in roll, the aircraft was also very sensitive in pitch and yaw due to the all flying tail; landing speeds were also very high.

A total of 49 were built and as well as seeing service with both French and British forces also few in small numbers with the Russians. It stayed in service with 3qn until the arrival of their Sopwith Camels in 1917.

Tone Paul Hippolyte Bayetto was a naturalised Italian who was granted British nationality 11 May 1915. He was the son of a top London chef. He joined the RFC in late 1915 and was sent to 3 Sqn in France in late February the following year where he received a “warm’ welcome from the Germans on one of his first missions. – 2 records of his mission of 2nd March exist…

“Sgt Bayetto on escort duty to the Valenciennes reconnaisance reports having been attacked by 5 Fokkers in the neighbourhood of Valenciennes. The reconnaisance machine dived to get clear but was closely followed by the hostile machines. Sgt Bayetto opened fire on the nearest hostile machine and drove it down, apparently into the woods near Valenciennes. After his engagement he saw no more signs of the reconnaisance machine and returned over Lille where he was again attacked by 3 Fokkers. These he eventually evaded and after circling around Lille for 15 minutes, returned to his landing ground”

And from a squadron journal.

“Whilst on an escort reconnaissance over Douai 1 Fokker came up and then 4 more, dived on Fokker at 12500 feet which was shot down in woods near Valenciennes – on fire – Sgt Bayetto OK . . . Escorted 2 seater Morane and met two more groups Fokkers, total: 9 Fokkers between 7:45 am and 9:45 am.”

Captain Bayetto was killed in a flying accident 28 July 1918 whilst serving at 29 TDS (Training Depot Station) flying a Sopwith Dolphin E4449. He is buried in Ruislip, Middlesex

This isn’t the most complicated model on the planet and is very much a product of its age (having been first released in 1965), this was the 1989 boxing though which featured both RFC and French decal options and has 23 parts (including a pilot figure). The cockpit is void of all detail apart from a seat so I trimmed apiece of coke can to shape for an instrument panel. The kit comes with a wraparound windscreen frame (but no “glass” to fill it), I changed this to an older style single glass deflector pane (a Jaguar HUD actually

The surface is nicely textured to differentiate between metal and fabric surfaces and the wings are already pre-drilled for the rigging to pass though.

The decals were browned with age, so I scanned them, cleaned them up a bit in photoshop and reprinted them. The roundels came from a Pegasus sheet and were extremely thin (which helps show through the fabric texture). The rigging was done with EZ-line as usual and due to the monoplane layout was pretty easy.

To get a shade similar to CDL (Clear Doped Linen) I mixed Vallejo Ivory and Beige approximately 50/50.

The serial number is for the aircraft flown by Sgt.Bayetto in March 1916, and was printed at the same time as the decal sheet, substituting it for the kit serial.