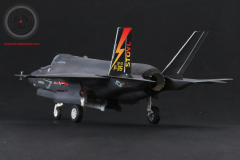 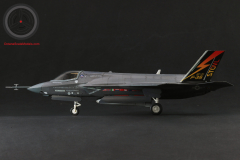 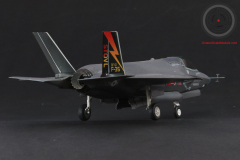 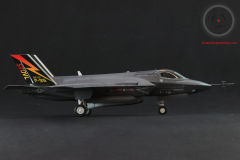 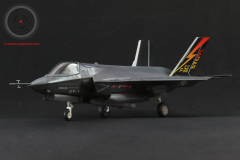 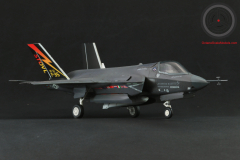 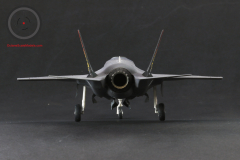 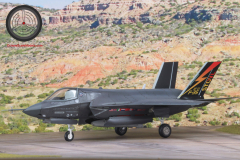 BF-01 was the initial F-35B off the production line and first flew on 11th June 2008, it achieved its first hover on 18th March 2010. It remains a test and development airframe retaining its distinctive tails colours to this day.

Fujimi were very quick out of the gate with their F-35B and for many years since its 2010 launch it was pretty much the only game in town for the F-35B. Although it can be built with the intake and outlet doors open for the vertical flight fan, the kit is let down by having the auxiliary intake doors behind the large vertical intake moulded closed, and as these are always open with the main vertical inlet door it rather lets the side down (although when the kit was tooled, nobody had actually seen it hover so the omission is probably understandable) – likewise with the also omitted underwing reaction control vent doors.

The kit comes with a pitot which is fitted through a drilled hole in the nose to represent that of the 1st production machine, but I replaced it with a bits box one (from an F-22 actually) which looks a bit more like the one fitted. The name on the cockpit side is that of David “Doc” Nelson, Lockheed Martin’s chief test pilot on the programme.

Although BF-01 now flying in what looks like Have Glass V paint it originally took to the skies in a dark grey finish (the 1st flight pre-dated the development of Have Glass), after a bit of experimenting I settled for Dark Sea Grey; I know it for sure wasn’t this exact shade (being drawn from British Standard colour chips), but I couldn’t find an American “FS” paint that looked close enough. I used Hataka Orange Line as usual.

The kit is a VERY simple build as it actually mostly clips together! be careful doing dry fits though as once the pieces are in place it is almost impossible to get them apart again! The decals applied with no problems at all.

Fujimi have released this again recently in operational colours, but given the omission in the auxiliary intakes and the fact it has a couple of lumps and bumps not seen on later airframes I would say that there are much better alternatives for the money if you want an operational configured and liveried F-35B.